Why Are They Higher Here Than Elsewhere? 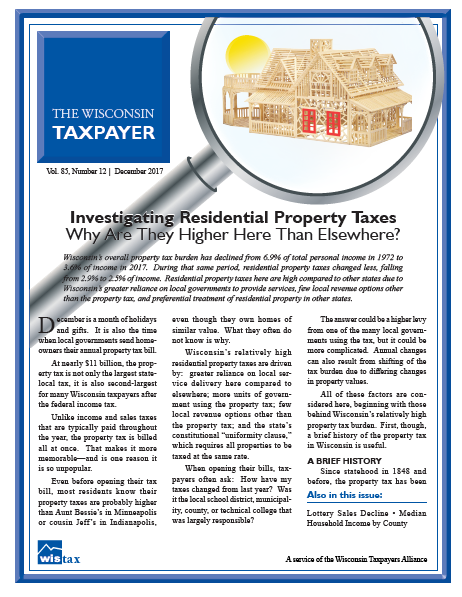 December is a month of holidays and gifts. It is also the time when local governments send home-owners their annual property tax bill.
At nearly $11 billion, the property tax is not only the largest state-local tax, it is also second-largest for many Wisconsin taxpayers after the federal income tax.
Unlike income and sales taxes that are typically paid throughout the year, the property tax is billed all at once. That makes it more memorable and is one reason it is so unpopular.
Even before opening their tax bill, most residents know their property taxes are probably higher than Aunt Bessie’s in Minneapolis or cousin Jeff’s in Indianapolis, even though they own homes of similar value. What they often do not know is why.
Wisconsin’s relatively high residential property taxes are driven by: greater reliance on local service delivery here compared to elsewhere; more units of government using the property tax; few local revenue options other than the property tax; and the state’s constitutional “uniformity clause,” which requires all properties to be taxed at the same rate.
When opening their bills, tax¬payers often ask: How have my taxes changed from last year? Was it the local school district, municipality, county, or technical college that was largely responsible?
The answer could be a higher levy from one of the many local governments using the tax, but it could be more complicated. Annual changes can also result from shifting of the tax burden due to differing changes in property values.
All of these factors are considered here, beginning with those behind Wisconsin’s relatively high property tax burden. First, though, a brief history of the property tax in Wisconsin is useful.