The Story of School Finance in Wisconsin 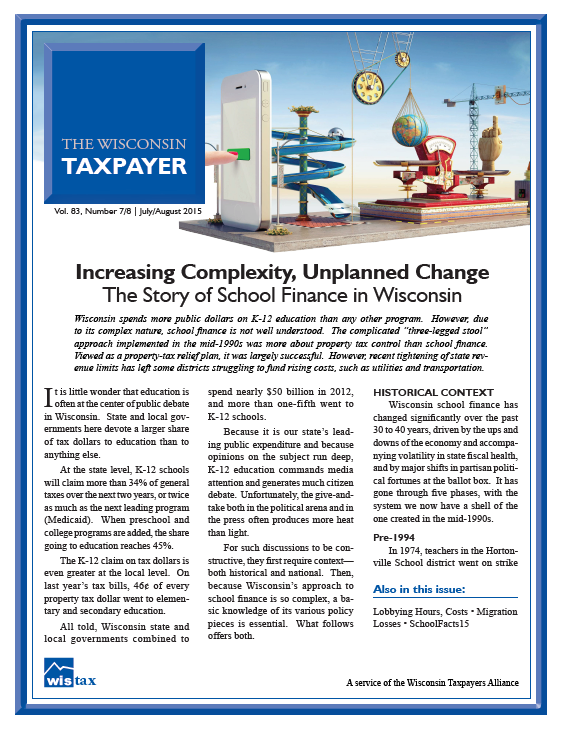 Wisconsin spends more public dollars on K-12 education than any other program. However, due to its complex nature, school finance is not well understood. The complicated “three-legged stool” approach implemented in the mid-1990s was more about property tax control than school finance. Viewed as a property-tax relief plan, it was largely successful. However, recent tightening of state revenue limits has left some districts struggling to fund rising costs, such as utilities and transportation.

It is little wonder that education is often at the center of public debate in Wisconsin. State and local governments here devote a larger share of tax dollars to education than to anything else.
At the state level, K-12 schools will claim more than 34% of general taxes over the next two years, or twice as much as the next leading program (Medicaid). When preschool and college programs are added, the share going to education reaches 45%.
The K-12 claim on tax dollars is even greater at the local level. On last year’s tax bills, 46¢ of every property tax dollar went to elementary and secondary education.
All told, Wisconsin state and local governments combined to spend nearly $50 billion in 2012, and more than one-fifth went to K-12 schools.
Because it is our state’s leading public expenditure and because opinions on the subject run deep, K-12 education commands media attention and generates much citizen debate. Unfortunately, the give-and-take both in the political arena and in the press often produces more heat than light.
For such discussions to be constructive, they first require context—both historical and national. Then, because Wisconsin’s approach to school finance is so complex, a basic knowledge of its various policy pieces is essential. What follows offers both.