How Have Schools Fared? Wisconsin vs. U.S.

K-12 Education in the Recession and After 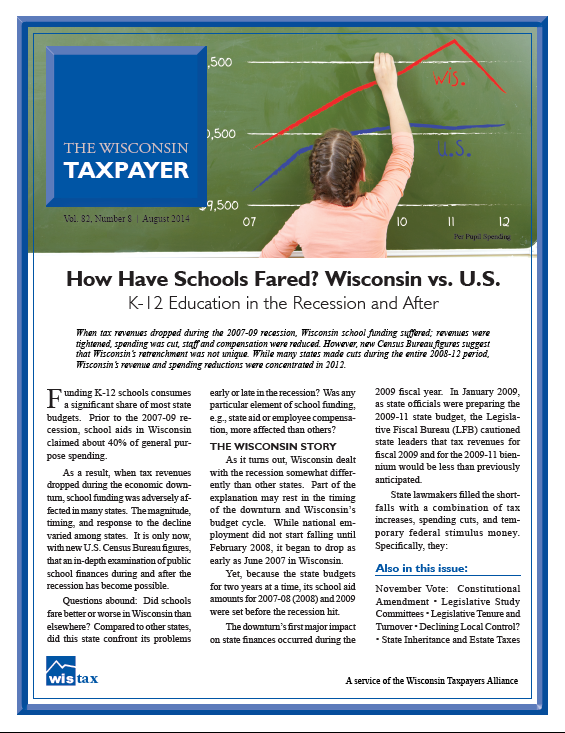 When tax revenues dropped during the 2007-09 recession, Wisconsin school funding suffered; revenues were tightened, spending was cut, staff and compensation were reduced. However, new Census Bureau figures suggest that Wisconsin’s retrenchment was not unique. While many states made cuts during the entire 2008-12 period, Wisconsin’s revenue and spending reductions were concentrated in 2012.

Funding K-12 schools consumes a significant share of most state budgets. Prior to the 2007-09 recession, school aids in Wisconsin claimed about 40% of general purpose spending.
As a result, when tax revenues dropped during the economic downturn, school funding was adversely affected in many states. The magnitude, timing, and response to the decline varied among states. It is only now, with new U.S. Census Bureau figures, that an in-depth examination of public school finances during and after the recession has become possible.
Questions abound: Did schools fare better or worse in Wisconsin than elsewhere? Compared to other states, did this state confront its problems early or late in the recession? Was any particular element of school funding, e.g., state aid or employee compensation, more affected than others?
THE WISCONSIN STORY
As it turns out, Wisconsin dealt with the recession somewhat differently than other states. Part of the explanation may rest in the timing of the downturn and Wisconsin’s budget cycle. While national employment did not start falling until February 2008, it began to drop as early as June 2007 in Wisconsin.
Yet, because the state budgets for two years at a time, its school aid amounts for 2007-08 (2008) and 2009 were set before the recession hit.
The downturn’s first major impact on state finances occurred during the 2009 fiscal year. In January 2009, as state officials were preparing the 2009-11 state budget, the Legislative Fiscal Bureau (LFB) cautioned state leaders that tax revenues for fiscal 2009 and for the 2009-11 biennium would be less than previously anticipated.