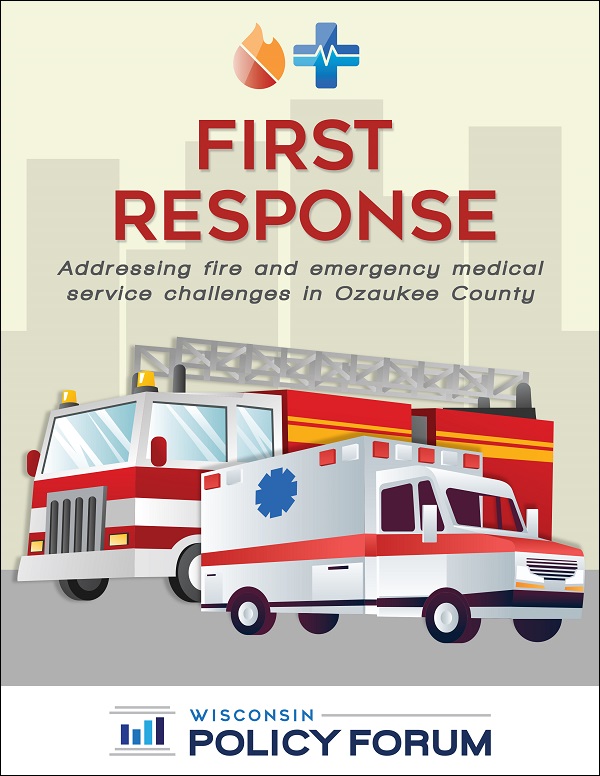 As part of the metro Milwaukee region and home to several burgeoning suburbs, many might assume that Ozaukee County is served by robust fire and emergency medical service operations that rival those of its neighbors in Milwaukee County to the south or Waukesha County to the west. A closer look, however, reveals that is not the case. Relying largely on part-time paid and unpaid volunteers, the fire and rescue departments that serve Ozaukee County all take a comparatively bare-boned and inexpensive approach.

That approach has generally served these communities well over time. Indeed, the dedication of part-time and volunteer staff and the ability of several departments to sustain their operations through fundraising and other creative means have been justifiable sources of community pride. Yet, it is also evident that the traditional approach is now showing severe signs of distress.

These signs began to emerge several years ago but have now intensified in light of the ongoing COVID-19 pandemic. Not only has the coronavirus amplified the importance of having sufficient numbers of well-trained personnel and adequate equipment and capital resources to respond to medical emergencies, but it has also exposed the weaknesses of a staffing model that relies on part-time and volunteer staff who cannot be counted on as heavily to respond to calls given the spread of the virus and the risk it entails.

In this report, at the behest of Ozaukee County’s municipal leaders, the Wisconsin Policy Forum explores options that Ozaukee County’s municipal governments may wish to consider to collaboratively respond to their growing fire and EMS service delivery challenges. In asking the Forum to analyze such options, Ozaukee County leaders are not alone. Even before the pandemic, efforts to explore enhanced service sharing and cooperation among regional fire and EMS providers were becoming more common in Wisconsin and across the nation.

In the southeast Wisconsin region, the North Shore Fire Department in Milwaukee County has received national recognition as an example of a highly successful consolidated fire department that has seen improved service at a lower cost since its creation in 1995. The South Shore Fire Department in Racine County and Western Lakes Fire District in Waukesha County also have demonstrated the benefits that can accrue from fire and rescue consolidation. Other communities have stopped short of consolidation but have developed detailed mutual and automatic aid agreements among neighboring jurisdictions.

While fire and EMS service sharing may provide opportunities for fiscal savings from economies of scale, the Wisconsin Policy Forum has found that a more compelling rationale is the potential for municipalities to enhance service levels and keep up with capital needs on a collaborative basis at a cost that would be far lower than if they attempted to do so individually.

For smaller communities in particular, service sharing or consolidation may offer an opportunity to secure full-time fire and EMS service capacity for a price tag that would not be affordable if pursued independently. Meanwhile, for larger communities facing service expansion demands, such strategies may offer the opportunity to spread the cost of such expansion while providing a higher level of service across a broader geographic area.

The analysis was conducted with the input and cooperation of administrators and fire chiefs from each of the participating departments. Elected officials from each of the communities also were briefed at the beginning and midway points of the project. While not endorsing any specific approach, the chiefs from the nine participating departments met or spoke several times with Forum researchers throughout the study process to share information and discuss operational details of various service sharing options.

It is important to note that its purpose of our analysis was not to recommend a specific consolidation approach and implementation plan. Instead, the intent was to develop a range of potential options and provide sufficient fiscal and programmatic analysis to allow decision-makers to determine which (if any) of those options should be considered for more detailed analysis, refinement, and possible implementation. Continue reading…