Every Student Succeeds Act: A New Window on School Spending 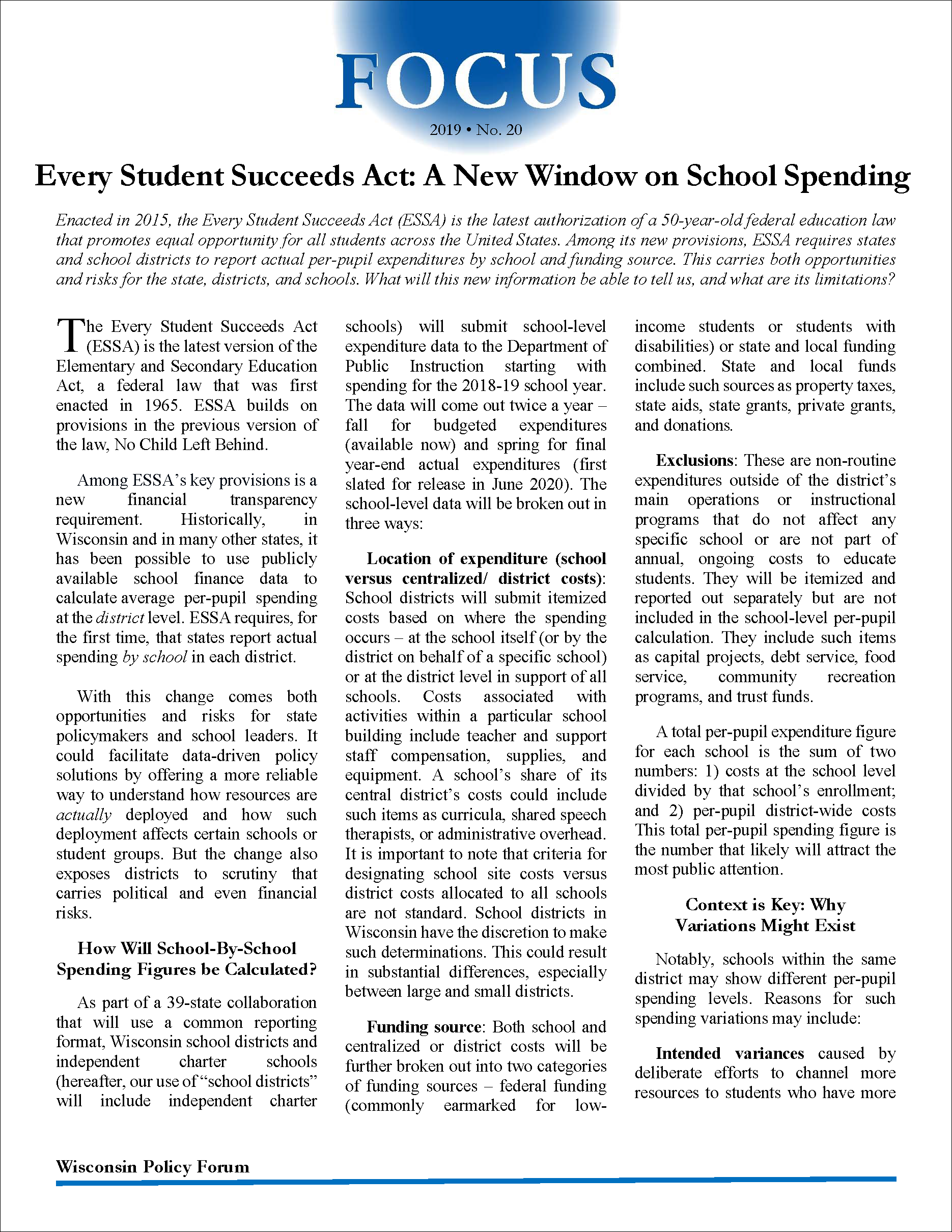 Enacted in 2015, the Every Student Succeeds Act (ESSA) is the latest authorization of a 50-year-old federal education law that promotes equal opportunity for all students across the United States. Among its new provisions, ESSA requires states and school districts to report actual per-pupil expenditures by school and funding source. This carries both opportunities and risks for the state, districts, and schools. What will this new information be able to tell us, and what are its limitations?

The Every Student Succeeds Act (ESSA) is the latest version of the Elementary and Secondary Education Act, a federal law that was first enacted in 1965. ESSA builds on provisions in the previous version of the law, No Child Left Behind.

Among ESSA’s key provisions is a new financial transparency requirement. Historically, in Wisconsin and in many other states, it has been possible to use publicly available school finance data to calculate average per-pupil spending at the district level. ESSA requires, for the first time, that states report actual spending by school in each district.

With this change comes both opportunities and risks for state policymakers and school leaders. It could facilitate data-driven policy solutions by offering a more reliable way to understand how resources are actually deployed and how such deployment affects certain schools or student groups. But the change also exposes districts to scrutiny that carries political and even financial risks.

How Will School-By-School Spending Figures be Calculated?

As part of a 39-state collaboration that will use a common reporting format, Wisconsin school districts and independent charter schools (hereafter, our use of “school districts” will include independent charter schools) will submit school-level expenditure data to the Department of Public Instruction starting with spending for the 2018-19 school year. The data will come out twice a year – fall for budgeted expenditures (available now) and spring for final year-end actual expenditures (first slated for release in June 2020). The school-level data will be broken out in three ways:

Location of expenditure (school versus centralized/ district costs): School districts will submit itemized costs based on where the spending occurs – at the school itself (or by the district on behalf of a specific school) or at the district level in support of all schools. Costs associated with activities within a particular school building include teacher and support staff compensation, supplies, and equipment. A school’s share of its central district’s costs could include such items as curricula, shared speech therapists, or administrative overhead. It is important to note that criteria for designating school site costs versus district costs allocated to all schools are not standard. School districts in Wisconsin have the discretion to make such determinations. This could result in substantial differences, especially between large and small districts.

Funding source: Both school and centralized or district costs will be further broken out into two categories of funding sources – federal funding (commonly earmarked for low-income students or students with disabilities) or state and local funding combined. State and local funds include such sources as property taxes, state aids, state grants, private grants, and donations.

Exclusions: These are non-routine expenditures outside of the district’s main operations or instructional programs that do not affect any specific school or are not part of annual, ongoing costs to educate students. They will be itemized and reported out separately but are not included in the school-level per-pupil calculation. They include such items as capital projects, debt service, food service, community recreation programs, and trust funds.

A total per-pupil expenditure figure for each school is the sum of two numbers: 1) costs at the school level divided by that school’s enrollment; and 2) per-pupil district-wide costs This total per-pupil spending figure is the number that likely will attract the most public attention.

Notably, schools within the same district may show different per-pupil spending levels. Reasons for such spending variations may include:

Intended variances caused by deliberate efforts to channel more resources to students who have more costly educational needs. In Wisconsin, all students are counted equally for the purposes of calculating increases in per-pupil funding under state revenue limits and per-pupil funding under the state’s equalization aid formula. However, a number of additional state and federal aids target pupils with higher-cost needs (e.g. low-income students, students with disabilities, and English learners). As a result, one would expect per-pupil funding to differ by school based on their distinct concentrations of students with varying levels of educational needs.

School, district, and community effects that create cost differences between schools or districts but that do not affect students’ equitable access to educational resources. For example, observers should expect to see differences in per-pupil costs based on whether the school serves elementary, middle school, or high school grades, as costs typically increase in higher grades. In addition, higher spending levels in schools with dispersed student populations may reflect higher transportation costs, and higher spending levels in schools with older buildings may reflect higher facility-related costs. State-imposed revenue limits that cap school districts’ largest funding sources differ across the state and lead to spending differences. Finally, a school’s enrollment drives per-pupil spending calculations. The higher the enrollment, the lower the per-pupil cost for things all schools have to pay for like principals, utilities, and curricula.

Other variances that cannot be explained by the first two categories. These could point to unintended inequities that school and community leaders may wish to analyze and correct. In fact, this is one of the primary rationales for the shift to school-level reporting. For example, a school with a lower spending level than a neighboring school may have a less experienced teacher workforce with lower compensation, while a school with a higher spending level may be particularly effective in securing outside grants or donations. In either case, district officials may wish to use that information in determining the appropriate allocation of district resources.

The ESSA law does not require states and school districts to report spending data alongside student performance measures. However, the public has had access to data on a variety of school-level achievement metrics for years, and citizens will now be able to connect school spending data and achievement data on their own.

Researchers at Georgetown University have consulted extensively with Wisconsin and other states on how to develop their common school-level reporting system and how to address the questions the new system might raise. They suggest states and districts chart these data to understand patterns in the relationship between student outcomes and school spending.

Although Wisconsin’s actual spending data for the 2018-19 school year will not be released until next June, we can gain some early insights by using the budgeted data that school districts already submitted.

The new ESSA-required school-by-school spending figures will not tell the whole story about equity, efficiency, or performance in Wisconsin schools. However, this new information could lead to important conversations among both school and community leaders about the use of resources and whether resource allocation decisions or practices are putting some students at a relative disadvantage.

Indeed, many states farther down the school-level reporting road than Wisconsin have been using their data to adopt new funding systems that use weighted student formulas based on the educational costs associated with certain student characteristics (e.g. poverty status, English learner status, disability, grade level, and so on).

As politically risky as this new financial transparency requirement may be for state and district officials in Wisconsin, it nevertheless holds promise to help advance the state toward its goal of providing the education each child needs to graduate college and career ready.