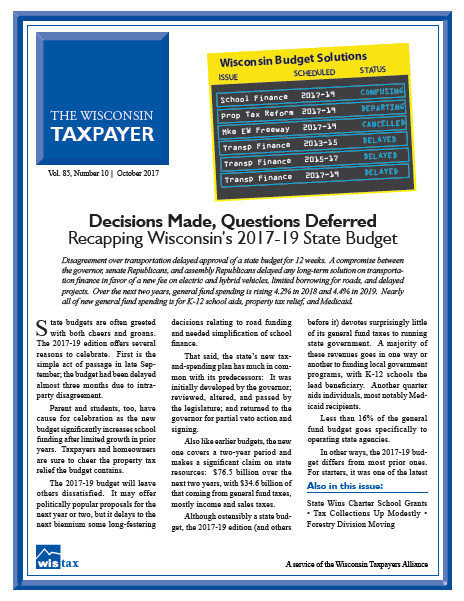 Disagreement over transportation delayed approval of a state budget for 12 weeks. A compromise between the governor, senate Republicans, and assembly Republicans delayed any long-term solution on transportation finance in favor of a new fee on electric and hybrid vehicles, limited borrowing for roads, and delayed projects. Over the next two years, general fund spending is rising 4.2% in 2018 and 4.4% in 2019. Nearly all of new general fund spending is for K-12 school aids, property tax relief, and Medicaid.

State budgets are often greeted with both cheers and groans. The 2017-19 edition offers several reasons to celebrate. First is the simple act of passage in late September; the budget had been delayed almost three months due to intraparty disagreement.
Parent and students, too, have cause for celebration as the new budget significantly increases school funding after limited growth in prior years. Taxpayers and homeowners are sure to cheer the property tax relief the budget contains.
The 2017-19 budget will leave others dissatisfied. It may offer politically popular proposals for the next year or two, but it delays to the next biennium some long-festering decisions relating to road funding and needed simplification of school finance.
That said, the state’s new tax-and-spending plan has much in common with its predecessors: It was initially developed by the governor; reviewed, altered, and passed by the legislature; and returned to the governor for partial veto action and signing.
Also like earlier budgets, the new one covers a two-year period and makes a significant claim on state resources: $76.5 billion over the next two years, with $34.6 billion of that coming from general fund taxes, mostly income and sales taxes.
Although ostensibly a state bud¬get, the 2017-19 edition (and others before it) devotes surprisingly little of its general fund taxes to running state government. A majority of these revenues goes in one way or another to funding local government programs, with K-12 schools the lead beneficiary. Another quarter aids individuals, most notably Medicaid recipients.
Less than 16% of the general fund budget goes specifically to operating state agencies.