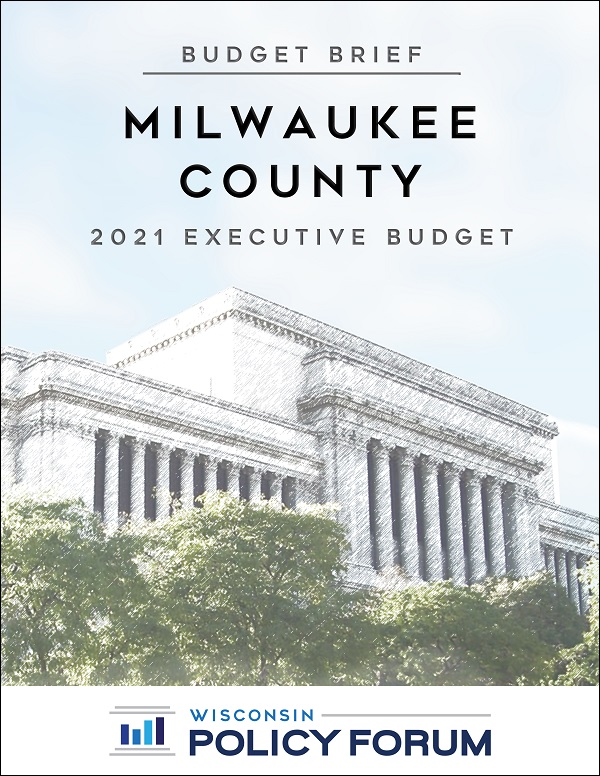 As the new county executive and his budget team launched the 2021 Milwaukee County budget process in late spring, the outlook was alarming. Preliminary estimates showed the county’s typical $15 to $20 million annual budget hole – which itself would be expected to pose a considerable challenge – had escalated to more than $40 million. A primary cause was the projected lingering effects of pandemic-produced hits to sales taxes, bus fares, parks and zoo fees, and other program revenues. Meanwhile, extra COVID-19 costs in areas ranging from emergency management to corrections to the courts continued to escalate with unknown ramifications for the 2021 budget.

As revenue projections, expenditure needs, and federal aid expectations were refined over the summer, however, better news emerged. Projected impacts to sales tax revenues – while still serious – were reduced based on better-than-expected collections as the economy re-opened. Meanwhile, federal coronavirus relief dollars were sufficient to provide a continuing lifeline for transit in 2021, and health care expenditure projections were revised downward as favorable claims activity emerged for the current year.

The result is a 2021 recommended budget that surprisingly avoids severe program and staffing cuts, major fee increases, and unreasonable use of reserves. Transit routes and fares are maintained at current levels, the Sheriff’s office loses only a handful of positions, and a wheel tax increase is averted – thus also lessening the prospects for conflict in areas that have triggered considerable controversy over the past decade. Even the capital budget – perhaps the county’s most serious long-term fiscal challenge – does not appear as stressed as in previous years.

Still, while the 2021 budget may be relatively conflict-free, it would be a mistake to consider this an “easy” budget or to assume the recent good news signals a permanent easing of the county’s longstanding structural imbalance. As we will discuss in this report, huge challenges remain for transit, parks, and infrastructure, and several of the positive factors that combined to relieve county leaders from agonizing choices for 2021 are unlikely to be available to similarly mitigate their stress in the years ahead.

In the pages that follow, we analyze the recommended budget’s deficit reduction strategies and key features mentioned above, as well as other elements that are relevant to the county’s immediate and long-term financial health. Our aim is to promote informed and thoughtful deliberations as policymakers consider the 2021 county budget in the weeks ahead. Continue reading…