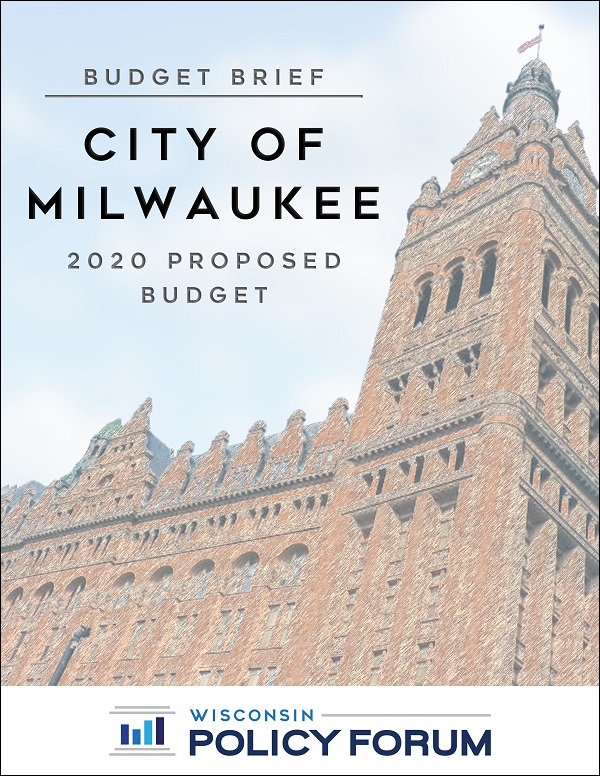 In our conclusion to last year’s city of Milwaukee budget brief, we warned that the “relative tranquility” associated with the 2019 budget was “likely the calm before the storm.” Little did we know that the storm would hit so quickly and with such intensity.

The key fiscal challenge for the city in most years is accommodating public safety pay and benefit increases and other costs to continue within the confines of its constrained revenue streams. For 2020, however, that challenge is leapfrogged by the need to prepare for a huge jump in the employer pension contribution. A growing list of requested capital projects and diminishing reserve balances add to the financial stress, making the 2020 budget one of the most difficult in recent years and likely the first in a long string of increasingly difficult budgets.

It is not unusual for the city’s pension fund contribution to be a leading story line in the proposed budget, but the problem is more serious this year. With a possible $87 million increase in the contribution forecast for 2023, the proposed budget starts to adjust now by allocating $8 million to the pension reserve fund. While fiscally prudent, the move eats up most of the proposed $9.8 million (3.5%) property tax levy increase (which would be the second largest percentage increase in the past decade), thus requiring most city departments to find ways to absorb cost-to-continue increases without added resources.

Perhaps hardest hit is the Milwaukee Police Department (MPD), which is not surprising given that it consumes nearly half of all general city purposes spending. Yet, here too the consequences are far more serious than in previous years. The proposed budget cuts police officer sworn strength by 60 positions, far exceeding the only other sworn strength reduction in recent memory of 27 positions in 2018.

A number of other concerning fiscal trends continue in 2020 and show little sign of abating. For example, the balance in the Tax Stabilization Fund continues to shrink, thus decreasing capacity for annual withdrawals. Also, the gap between capital project requests and financing capacity is expanding, with roughly $67 million in capital project requests deferred in the proposed budget.

In the pages that follow, we provide additional detail on these important elements of the 2020 proposed budget, as well as other factors that will influence the city’s immediate and longer-term fiscal fortunes. Our intent is to promote more informed discussion and debate as 2020 budget deliberations continue.