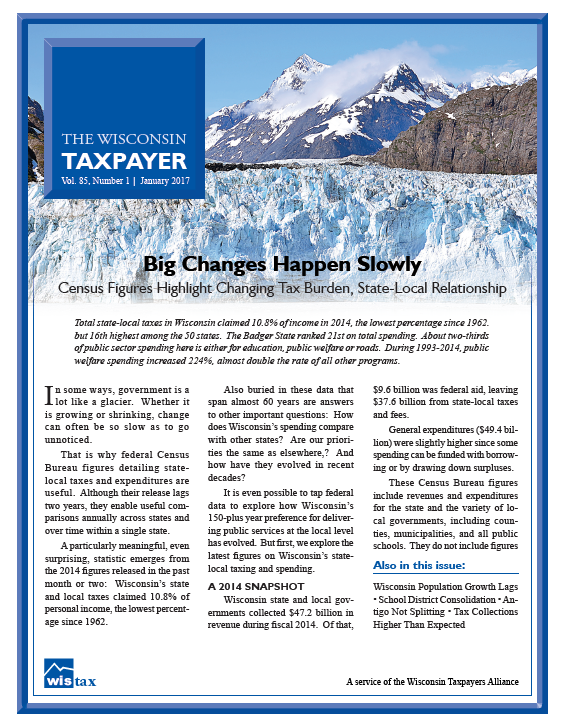 Total state-local taxes in Wisconsin claimed 10.8% of income in 2014, the lowest percentage since 1962, but 16th highest among the 50 states. The Badger State ranked 21st on total spending. About two-thirds of public sector spending here is either for education, public welfare or roads. During 1993-2014, public welfare spending increased 224%, almost double the rate of all other programs.

In some ways, government is a lot like a glacier. Whether it is growing or shrinking, change can often be so slow as to go unnoticed.
That is why federal Census Bureau figures detailing state-local taxes and expenditures are useful. Although their release lags two years, they enable useful comparisons annually across states and over time within a single state.
A particularly meaningful, even surprising, statistic emerges from the 2014 figures released in the past month or two: Wisconsin’s state and local taxes claimed 10.8% of personal income, the lowest percentage since 1962.
Also buried in these data that span almost 60 years are answers to other important questions: How does Wisconsin’s spending compare with other states? Are our priorities the same as elsewhere? And how have they evolved in recent decades?
It is even possible to tap federal data to explore how Wisconsin’s 150-plus year preference for delivering public services at the local level has evolved. But first, we explore the latest figures on Wisconsin’s state-local taxing and spending.