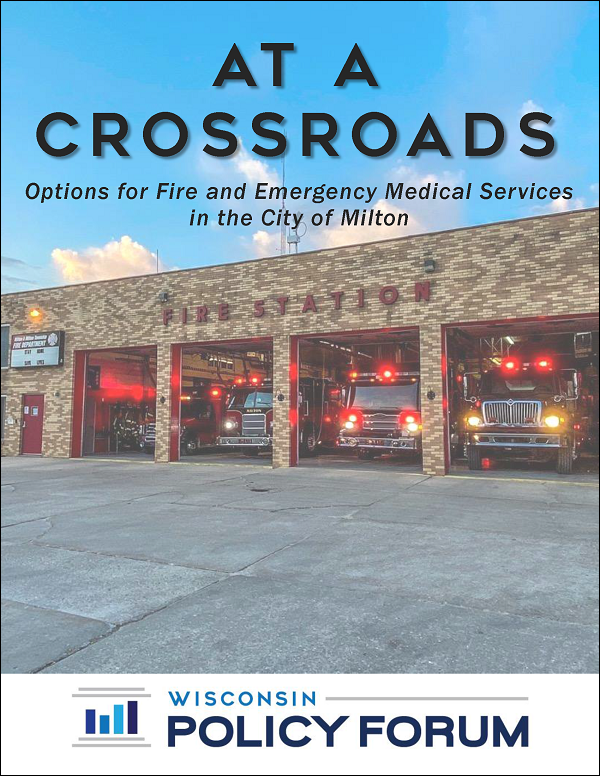 However, more recently, and particularly as Wisconsin’s economy emerges from the pandemic and labor shortages intensify, recruitment and retention barriers for part-time staff pose the greatest obstacle for many small communities as they seek to maintain traditional service frameworks.

The Milton Fire Department has a proud history of providing both fire response and EMS for the City of Milton and the townships of Milton, Harmony, Johnstown, Lima, and Koshkonong. In recent years, the department also has taken steps to coordinate services with the Janesville Fire Department through a service contract to share the Janesville chief and collaboration on a “closest unit responds” service model. However, like many fire and EMS agencies in Wisconsin, the Milton department is now struggling to maintain a staffing model that relies mostly on part-time staff.

This challenge prompted the City of Milton to consider options for a full-time staffing framework late last year for the Milton department’s service area, including the possibility of consolidating with the Janesville department. In response, the townships currently served by the department decided to also consider their own alternatives. In fact, the Town of Milton recently drafted a petition to join the Edgerton fire district that also will be considered by the other towns. These actions have prompted city officials to consider both the Janesville consolidation option and a standalone option solely for their jurisdiction.

While the towns are considering alternative options for fire and EMS service, Janesville is also reconsidering its agreements with the Milton Fire Department. City of Milton leaders are now faced with a difficult decision on how to best provide fire and EMS service, including a likely need to pursue a voter referendum to approve additional costs that may result.

The Wisconsin Policy Forum (WPF) has analyzed fire and EMS service delivery challenges in dozens of departments across Wisconsin. In fact, we have conducted nine comprehensive fire and EMS service sharing studies for municipalities in Milwaukee, Racine, Kenosha, Jefferson, Ozaukee, and La Crosse counties over the past eight years.

In April 2021, city officials asked us to conduct an analysis to assist them in their consideration of options for their future fire and rescue services. Specifically, our task was to focus on the following:

In this report, we present the findings of our analysis. Because we strived to complete the project by July 1 to accommodate the city’s need for timely decision-making and to prepare for a potential future voter referendum, our fiscal and programmatic analysis has been conducted at a high level. However, we are hopeful that it will provide city and regional officials with an objective overview that can be built upon to develop an effective and cost efficient path forward.