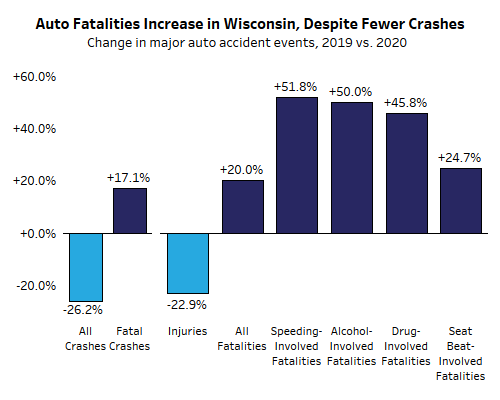 Even as the nation saw an unprecedented drop in driving at the onset of the COVID-19 pandemic, Wisconsin recorded a significant increase in fatal car crashes and crash fatalities during the initial months of the crisis. This alarming uptick was fueled in part by increases of 50% or more in crash fatalities involving reckless driving behaviors such as alcohol or speeding.

While it has been established that motorists in Wisconsin drove much less during the early months of the pandemic, a surprising finding is the sharp rise in auto fatalities during this same period compared to 2019. Our review shows Wisconsin was out of step with nationwide trends during much of this time though other Midwest states also have seen auto fatalities increase throughout 2020.

The increase during this period of 2020 reflects in part that the comparable stretch of 2019 was a recent low-water mark for crash fatalities. But this period in 2020 remains unusual by recent standards and marked by less driving but a high level of fatalities linked to speeding and intoxication.

Wisconsin diverged from what was happening nationally during the second quarter of 2020, which includes most of this time period. Crash fatalities in Wisconsin increased by 21.5% year-over-year during the second quarter of 2020, according to state data. Nationally during the same period, the number of total crash fatalities declined modestly on a year-over-year basis, by about 3.3%, according to estimates from the National Highway Traffic Safety Administration (NHTSA).

Notably, while other Midwest states also are seeing increased traffic fatalities this year, Wisconsin’s increase is larger than most of its Midwest peers. This prompts questions about why, and what can be done in response.

For this comparison, the Forum used preliminary data from the Community Maps system developed and maintained by the Wisconsin Traffic Operations and Safety (TOPS) Laboratory at UW-Madison, in partnership with the Wisconsin Department of Transportation (WisDOT). While subject to final revision, the preliminary 2020 data give an approximate tally of crashes throughout the state during this period. The July 31 endpoint for the data provides a three-month lag period to ensure crash records – which originate from reports filed by local law enforcement agencies — are as fully updated, and therefore complete and accurate, as possible.

Earlier this year, WisDOT also provided traffic count data that were gathered at 52 locations on state, U.S., and interstate highways statewide. The figures – which admittedly do not include local roads – show traffic at these locations plunged more than 40% from early March to early April as the pandemic and state’s Safer at Home order took hold.

Despite the decrease in driving, Wisconsin saw not just increasing fatal car crashes and fatalities, but an especially pronounced year-over-year increase in fatalities related to reckless behaviors such as alcohol, drugs, or speeding.

Through October, the number of speeding violations cited by the Wisconsin State Patrol for vehicles traveling at speeds of 100 miles per hour or greater had more than doubled this year, according to data provided by WisDOT.

Some evidence supports the possibility of a national increase in impaired or reckless driving behavior during the pandemic. A report released in October by the Office of Behavioral Safety Research at NHTSA compared results of alcohol and drug testing of drivers and others involved in serious crashes this year. It found a significant increase, in a period starting after March 13 going through mid-July, in the share of those found to have alcohol or drugs in their system. Additional NHTSA research found that nationally, wholesale and retail alcohol sales saw sustained increases during this period, suggesting consumption likely increased as well.

That report also examined national data and found evidence that motorists were driving at higher speeds during the second quarter. It also noted a survey of police chiefs fielded in March and May found that more than half of respondents had reduced traffic and other enforcement to try to protect officers from COVID-19. It concluded that a “reduction in traffic volume (and) a reduction in law enforcement activity, created a driving environment with a much greater opportunity to speed, increasing the chance of crashes being fatal.

Also, reduced driving levels during the study period in 2020 mean the fatality rate of traffic deaths relative to miles driven was almost certainly at its highest level in the last five years, and potentially longer.

A review of other Midwest states shows Wisconsin is not alone in grappling with a greater number of traffic fatalities. Data collected by the Mid-America Association of State Transportation Officials show eight other Midwest states also recorded traffic fatalities increases in 2020 through Oct. 29. Since this does not include the lag period built into our previous analysis, the most recent period of this data is more subject to change and should be viewed with caution.

That said, Wisconsin’s fatality increase in this period, 7.4%, exceeded the average increase among these nine states, which was 5.2%. Three of our neighbors, Illinois, Iowa, and Michigan, saw much smaller increases in crash fatalities while Minnesota saw a larger jump.

We examined the state’s four largest combined statistical areas (CSAs) as defined by the U.S. Census Bureau: the Milwaukee-Racine-Waukesha CSA; the Madison-Janesville-Beloit CSA; and two contiguous areas which we combined for purposes of this analysis, the Appleton-Oshkosh-Neenah CSA and the Green Bay-Shawano CSA.

As shown in Figure 2, we found notable increases in fatalities during the study period in 2020 relative to 2019 in the two largest CSAs centered in Milwaukee and Madison. There was virtually no increase in the two CSAs centered on Green Bay and the Fox Cities in northeast Wisconsin.

The remaining counties in the state also saw a year-over-year increase. Though total fatalities and fatal crashes were not elevated when compared to the past five years– they almost certainly were in relation to vehicle miles traveled.

These data provide a sobering look at how more Wisconsinites lost their lives on our roadways in recent months, even as many residents stayed home more and traveled less.

The reasons for these trends are not fully understood. The stress and isolation associated with the pandemic as well as the rise in unemployment may have contributed to increased levels of driving under the influence of drugs or alcohol. With fewer vehicles on the road at one time, some motorists may have driven faster – with the outcome being fewer but also more serious crashes. Reduced traffic enforcement during this period also may have been a factor though we do not have state-specific data on this point.

Heading into 2020, there were positive indicators surrounding traffic safety in Wisconsin. Even as motorists were driving more, the state recorded two straight years of decreases in total fatal crashes in 2018 and 2019. It also has seen a long-term decline in alcohol-involved crash fatalities.

A key question is whether the trends that began in March 2020 represent a brief blip or a sustained increase that demands a response by policymakers. This might occur through public awareness campaigns such as those that encourage seat belt use. Other options include roadway improvements to bolster safety, or efforts to target speeding, impaired driving, or substance abuse.

Law enforcement and transportation agencies have longstanding experience in addressing many of these issues. Whether they are able to prioritize them given their tight budgets and many pandemic-related demands may be determined in the coming months, as we work to restore our state to a pre-pandemic trajectory of safer roads.