After the Storm: School Funding in 2012

What Happened to Revenues, Costs, Staff? 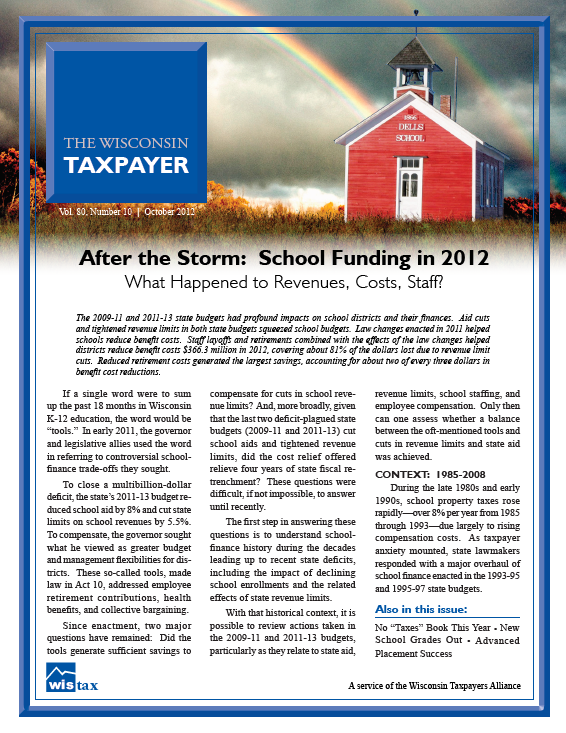 The 2009-11 and 2011-13 state budgets had profound impacts on school districts and their finances. Aid cuts and tightened revenue limits in both state budgets squeezed school budgets. Law changes enacted in 2011 helped schools reduce benefit costs. Staff layoffs and retirements combined with the effects of the law changes helped districts reduce benefit costs $366.3 million in 2012, covering about 81% of the dollars lost due to revenue limit cuts. Reduced retirement costs generated the largest savings, accounting for about two of every three dollars in benefit cost reductions.

If a single word were to sum up the past 18 months in Wisconsin K-12 education, the word would be “tools.” In early 2011, the governor and legislative allies used the word in referring to controversial school-finance trade-offs they sought.
To close a multibillion-dollar deficit, the state’s 2011-13 budget reduced school aid by 8% and cut state limits on school revenues by 5.5%. To compensate, the governor sought what he viewed as greater budget and management flexibilities for districts. These so-called tools, made law in Act 10, addressed employee retirement contributions, health benefits, and collective bargaining.
Since enactment, two major questions have remained: Did the tools generate sufficient savings to compensate for cuts in school revenue limits? And, more broadly, given that the last two deficit-plagued state budgets (2009-11 and 2011-13) cut school aids and tightened revenue limits, did the cost relief offered relieve four years of state fiscal retrenchment? These questions were difficult, if not impossible, to answer until recently.
The first step in answering these questions is to understand school-finance history during the decades leading up to recent state deficits, including the impact of declining school enrollments and the related effects of state revenue limits.
With that historical context, it is possible to review actions taken in the 2009-11 and 2011-13 budgets, particularly as they relate to state aid, revenue limits, school staffing, and employee compensation. Only then can one assess whether a balance between the oft-mentioned tools and cuts in revenue limits and state aid was achieved.