Prognosis is Better But Challenges Remain 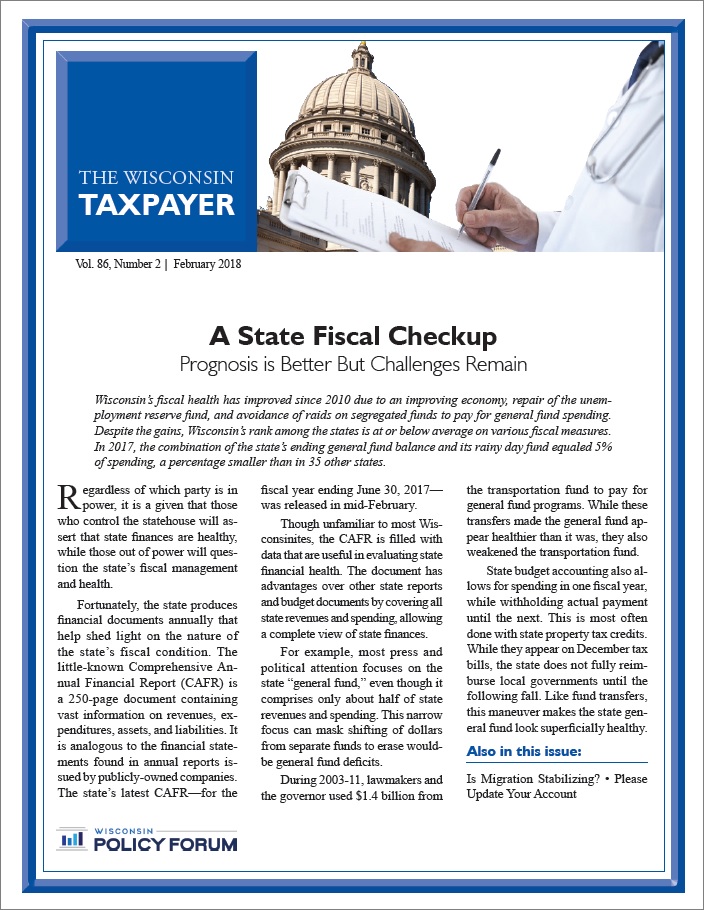 Wisconsin’s fiscal health has improved since 2010 due to an improving economy, repair of the unemployment reserve fund, and avoidance of raids on segregated funds to pay for general fund spending. Despite the gains, Wisconsin’s rank among the states is at or below average on various fiscal measures. In 2017, the combination of the state’s ending general fund balance and its rainy day fund equaled 5% of spending, a percentage smaller than in 35 other states.

Regardless of which party is in power, it is a given that those who control the statehouse will as­sert that state finances are healthy, while those out of power will ques­tion the state’s fiscal management and health.

Fortunately, the state produces financial documents annually that help shed light on the nature of the state’s fiscal condition. The little-known Comprehensive An­nual Financial Report (CAFR) is a 250-page document containing vast information on revenues, ex­penditures, assets, and liabilities. It is analogous to the financial state­ments found in annual reports is­sued by publicly-owned companies. The state’s latest CAFR—for the fiscal year ending June 30, 2017— was released in mid-February.

Though unfamiliar to most Wis­consinites, the CAFR is filled with data that are useful in evaluating state financial health. The document has advantages over other state reports and budget documents by covering all state revenues and spending, allowing a complete view of state finances.

For example, most press and political attention focuses on the state “general fund,” even though it comprises only about half of state revenues and spending. This narrow focus can mask shifting of dollars from separate funds to erase would-be general fund deficits.

State budget accounting also al­lows for spending in one fiscal year, while withholding actual payment until the next. This is most often done with state property tax credits. While they appear on December tax bills, the state does not fully reim­burse local governments until the following fall. Like fund transfers, this maneuver makes the state gen­eral fund look superficially healthy. Continue reading…