Do levy limits lock in disparities in high- and low-growth municipalities? 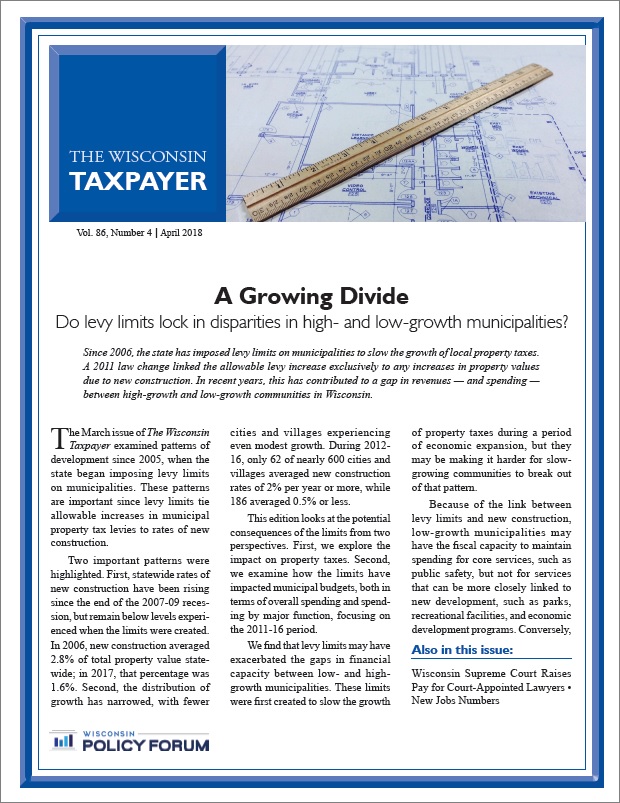 Since 2006, the state has imposed levy limits on municipalities to slow the growth of local property taxes. A 2011 law change linked the allowable levy increase exclusively to any increases in property values due to new construction. In recent years, this has contributed to a gap in revenues – and spending – between high-growth and low-growth communities in Wisconsin.

The March issue of The Wisconsin Taxpayer examined patterns of development since 2005, when the state began imposing levy limits on municipalities. These patterns are important since levy limits tie allowable increases in municipal property tax levies to rates of new construction.

Two important patterns were highlighted. First, statewide rates of new construction have been rising since the end of the 2007-09 reces­sion, but remain below levels experi­enced when the limits were created. In 2006, new construction averaged 2.8% of total property value state­wide; in 2017, that percentage was 1.6%. Second, the distribution of growth has narrowed, with fewer cities and villages experiencing even modest growth. During 2012- 16, only 62 of nearly 600 cities and villages averaged new construction rates of 2% per year or more, while 186 averaged 0.5% or less.

This edition looks at the potential consequences of the limits from two perspectives. First, we explore the impact on property taxes. Second, we examine how the limits have impacted municipal budgets, both in terms of overall spending and spend­ing by major function, focusing on the 2011-16 period.

We find that levy limits may have exacerbated the gaps in financial capacity between low- and high-growth municipalities. These limits were first created to slow the growth of property taxes during a period of economic expansion, but they may be making it harder for slow-growing communities to break out of that pattern.

Because of the link between levy limits and new construction, low-growth municipalities may have the fiscal capacity to maintain spending for core services, such as public safety, but not for services that can be more closely linked to new development, such as parks, recreational facilities, and economic development programs. Continue reading…