A Glass Half-Empty or Half-Full? 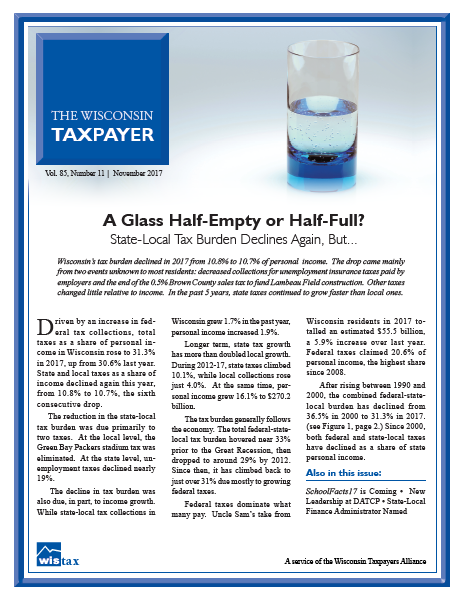 Wisconsin’s tax burden declined in 2017 from 10.8% to 10.7% of personal income. The drop came mainly from two events unknown to most residents: decreased collections for unemployment insurance taxes paid by employers and the end of the 0.5% Brown County sales tax to fund Lambeau Field construction. Other taxes changed little relative to income. In the past 5 years, state taxes continued to grow faster than local ones.

Driven by an increase in federal tax collections, total taxes as a share of personal in¬come in Wisconsin rose to 31.3% in 2017, up from 30.6% last year. State and local taxes as a share of income declined again this year, from 10.8% to 10.7%, the sixth consecutive drop.
The reduction in the state-local tax burden was due primarily to two taxes. At the local level, the Green Bay Packers stadium tax was eliminated. At the state level, unemployment taxes declined nearly 19%.
The decline in tax burden was also due, in part, to income growth. While state-local tax collections in Wisconsin grew 1.7% in the past year, personal income increased 1.9%.
Longer term, state tax growth has more than doubled local growth. During 2012-17, state taxes climbed 10.1%, while local collections rose just 4.0%. At the same time, personal income grew 16.1% to $270.2 billion.
The tax burden generally follows the economy. The total federal-state-local tax burden hovered near 33% prior to the Great Recession, then dropped to around 29% by 2012. Since then, it has climbed back to just over 31% due mostly to growing federal taxes.
Federal taxes dominate what many pay. Uncle Sam’s take from Wisconsin residents in 2017 totalled an estimated $55.5 billion, a 5.9% increase over last year. Federal taxes claimed 20.6% of personal income, the highest share since 2008.
After rising between 1990 and 2000, the combined federal-state-local burden has declined from 36.5% in 2000 to 31.3% in 2017.