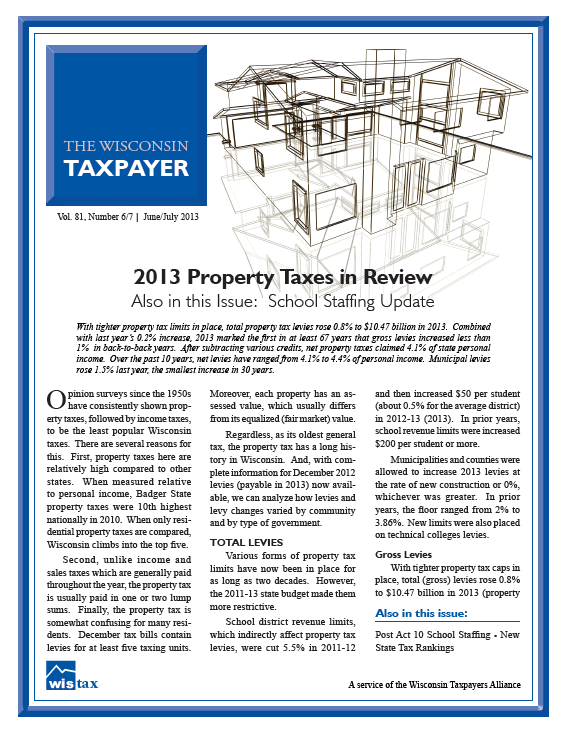 With tighter property tax limits in place, total property tax levies rose 0.8% to $10.47 billion in 2013. Combined with last year’s 0.2% increase, 2013 marked the first in at least 67 years that gross levies increased less than 1% in back-to-back years. After subtracting various credits, net property taxes claimed 4.1% of state personal income. Over the past 10 years, net levies have ranged from 4.1% to 4.4% of personal income. Municipal levies rose 1.5% last year, the smallest increase in 30 years.

Opinion surveys since the 1950s have consistently shown property taxes, followed by income taxes, to be the least popular Wisconsin taxes. There are several reasons for this. First, property taxes here are relatively high compared to other states. When measured relative to personal income, Badger State property taxes were 10th highest nationally in 2010. When only residential property taxes are compared, Wisconsin climbs into the top five.
Second, unlike income and sales taxes which are generally paid throughout the year, the property tax is usually paid in one or two lump sums. Finally, the property tax is somewhat confusing for many residents. December tax bills contain levies for at least five taxing units. Moreover, each property has an assessed value, which usually differs from its equalized (fair market) value.
Regardless, as its oldest general tax, the property tax has a long history in Wisconsin. And, with complete information for December 2012 levies (payable in 2013) now available, we can analyze how levies and levy changes varied by community and by type of government.
TOTAL LEVIES
Various forms of property tax limits have now been in place for as long as two decades. However, the 2011-13 state budget made them more restrictive.
School district revenue limits, which indirectly affect property tax levies, were cut 5.5% in 2011-12 and then increased $50 per student (about 0.5% for the average district) in 2012-13 (2013). In prior years, school revenue limits were increased $200 per student or more.
Municipalities and counties were allowed to increase 2013 levies at the rate of new construction or 0%, whichever was greater. In prior years, the floor ranged from 2% to 3.86%. New limits were also placed on technical colleges levies.