Is Municipal Debt Rising Too Fast?

Recent Wisconsin Policy Forum research finds stressful levels of capital debt in Milwaukee and Racine that are exacerbating other fiscal pressures. A review of other Wisconsin municipalities shows that debt levels are rising across the board, though few face the debt-related challenges of those two cities.

Earlier this month, we released an in-depth analysis of the City of Racine’s fiscal condition. This follows a similar report on the City of Milwaukee’s finances published in 2016.

While each government faces certain unique fiscal challenges tied to their distinctive economic circumstances and service demands, we also observed some striking similarities.

For example, both cities have shaky revenue structures due to their dual reliance on state shared revenues and the local property tax, which are constrained by state policies. Both governments also face formidable expenditure pressures from obligations to retirees and rising public safety costs.

A third similarity is substantial longterm capital debt. The need to service that debt in annual budgets is a significant contributor to operating budget challenges.

Debt in Milwaukee and Racine

According to Department of Revenue figures, Milwaukee had $925 million of long-term capital debt in 2016 while Racine had $101 million. That comes out to $1,555 per capita in Milwaukee and $1,293 in Racine.

Those debt levels fall within the amount allowed under state statutes, which specify that a municipality’s debt cannot exceed 5% of its equalized property value. Milwaukee’s debt equaled 68% of its limit and Racine’s 63%.

Debt service is a necessary expenditure that reflects a government’s commitment to maintaining vital infrastructure; nevertheless, high levels of debt service can signal fiscal distress, as they may crowd out needed expenditures on essential services.

What about other municipalities?

Our debt-related observations in Racine and Milwaukee made us wonder how those cities compared to other municipalities across Wisconsin.

We began by examining 10-year trends in total debt among the 140 cities and villages in Wisconsin with populations greater than 5,000. Overall, debt among those municipalities increased 29% from 2006 to 2016, which compares with a 19.5% rate of inflation.

When we group municipalities by population (see chart), we see that most of the groupings averaged debt growth in the 30%-38% range, which exceeded inflation but fell below Milwaukee and Madison. However, the 10 cities with populations between 50,000-105,000 averaged growth of only 7.2%.

Among those 10, debt rose about 80% in both Eau Claire and Waukesha, but declined about 30% in Kenosha and La Crosse, and 7% in West Allis. In addition to Racine, debt in Appleton, Green Bay, and Oshkosh grew 5% or less.

Another way of analyzing debt is to examine how municipal debt totals compare to the state limit of no more than 5% of equalized value.

Looking at the same 140 municipalities, we see that in 2006, debt totals comprised an average of 34.9% of allowable amounts under the state limits. In 2016, that percentage increased to 43.0%. 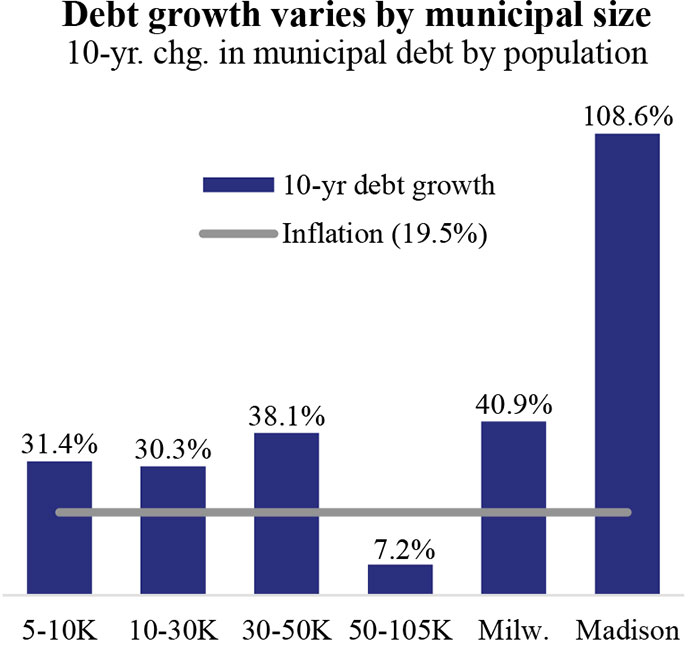 Breaking down the municipalities by size, we find that Milwaukee’s debt increased from 43.4% of the state limit to 68.4%, while Madison’s grew from 18.5% to 33.3%. It is important to note that Madison still was well below the state limit, reflecting greater financial capacity to handle its debt load, while Milwaukee had reached more than two-thirds of the limit.

While Racine’s overall debt grew minimally (0.3%) over the 10-year period, a decline in property values meant that by 2016, its total debt stood at 62.9% of the state limit, up from 51.3% a decade earlier. In fact, of the 12 cities with populations greater than 50,000, only Oshkosh (73.6%) had reached a higher percentage of the state debt limit than Milwaukee and Racine.

Among less populous cities and villages, 12 had debt limit percentages exceeding Milwaukee’s, including two (Altoona and Monona) that topped 80%.

Is municipal debt a concern?

Government finance professionals use several metrics to gauge local government debt levels. While no metric is perfect, it is generally most important to consider whether overall borrowing endangers future ability to repay, and the impact of debt service payments upon current budgets. Is debt service crowding out other spending for needed services?

Our broad scan cannot answer those questions for individual governments. We do find, however, that over the 2006-16 period, long-term debt growth outpaced inflation among our total group of cities and villages; and that debt comprises a larger percentage of equalized value for those municipalities than 10 years ago. These are trends that bear watching.

We also find that the relatively high levels of debt in Milwaukee and Racine–where total debt exceeds three-fifths of the state limit–are not necessarily representative of other large cities in Wisconsin, whose debt percentages tend to fall closer to one-third to one-half.

◾ Voters approved 60 of the 71 school district referenda on the April 3 ballot. They approved 23 of 25 referenda to exceed state-imposed revenue caps on a one-time basis, and five of seven to exceed the caps on a recurring basis.

Voters also approved 32 of 38 borrowing referenda, including eight of the 10 largest borrowing amounts. One of those two failing referenda, in the Beloit Turner district, lost by three votes following a recount.

The bill passed by lawmakers allowed for the holiday to last for two days, but Walker used his line-item veto power creatively and extended holiday from the 1st to the 5th of August.

◾ The Georgia legislature has sent Gov. Nathan Deal (R) a bill requiring online sellers to collect state sales taxes or notify buyers of their sales tax obligations, joining a growing list of states seeking to collect the taxes. The U.S. Supreme Court has ruled retailers need not collect the taxes unless they have brick- and-mortar businesses in the state, but heard arguments in April seeking to overturn those prior decisions.