A new leader has been crowned in the movement to advance the quality and speed of bus services in the U.S. After nearly a decade of looking to Cleveland’s HealthLine as the best model for bus rapid transit (BRT) in the nation — as we did in our Picking up the Pace report in 2015 — transit system leaders now can look to the new Albuquerque Rapid Transit (ART) service, which opened in late November. ART is the first in the U.S. to be recognized as a Gold Standard BRT service by the international Institute for Transportation and Development Policy.

ART provides faster, more frequent bus service (every 7.5 minutes) on Central Avenue, which is considered Albuquerque’s “main street.” Key features of the ART service that helped it earn the Gold Standard recognition include: 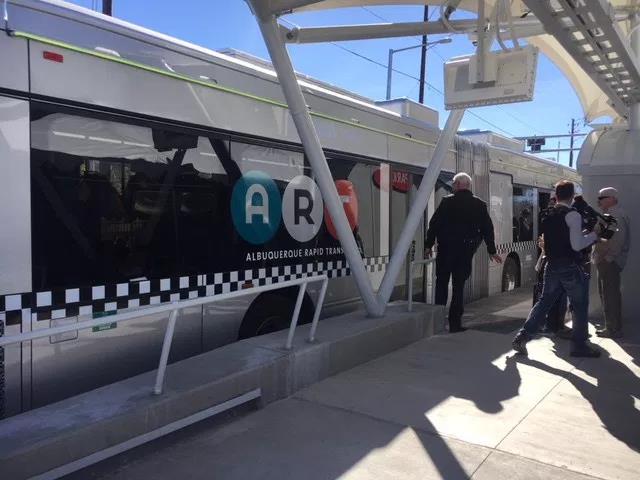 The project, which faced fierce debate in Albuquerque, ultimately was brought to the finish line by the city’s Republican mayor, Richard Berry, with bipartisan support from the Albuquerque City Council.

Here in Milwaukee, plans continue to advance for Milwaukee County’s East-West BRT project. The proposed service would connect downtown Milwaukee and the Regional Medical Center in Wauwatosa with the first BRT service in Wisconsin. In September, Milwaukee County submitted an application to the Federal Transit Administration (FTA) for a federal Small Starts grant that could cover up to 80% of the startup costs for the new service.

The East-West BRT service would have many of the same features as Albuquerque’s ART, including frequent service (every 10 minutes), transit signal prioritization, off-board ticketing, and level boarding at stations. However, following intense debate regarding the inclusion of dedicated bus lanes in the project, elected officials in the City of Milwaukee, City of Wauwatosa, and Milwaukee County came to a consensus on including dedicated bus lanes for only 53% of the nine-mile route, as shown in the map below. That decision addresses concerns raised by business owners along the route, but likely will impact the speed of the service and its potential to be recognized as a Gold Standard (Albuquerque) or Silver Standard (Cleveland) BRT route.

The FTA is expected to announce its decisions on which projects will receive the next round of Small Starts funding in February 2018. We will continue to monitor the East-West BRT project as developments occur.