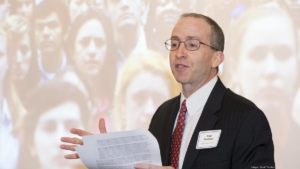 If a global pandemic that has disproportionately ravaged communities of color and nationwide protests stemming from the murder of George Floyd cannot awaken state and regional policymakers to the need to address metro Milwaukee’s unacceptable disparities, then it is difficult to imagine what would.

Of course, the same might have been said in the wake of the Sherman Park unrest and Dontre Hamilton’s tragic death. But the circumstances this time are more global in nature and the mood appears decidedly different. I’m hopeful the time has finally come.

Yet, despite my optimism that some action will be taken, I am concerned that the focus on police practices and violence will lead to an understandable but singular focus on police reforms at the expense of the broader economic and structural reforms needed to address metro Milwaukee’s systemic racial inequities. Law enforcement policy changes must be considered in Milwaukee and throughout our metro region, but that will not be enough.

Fortunately, metro Milwaukee policymakers and civic leaders do not have to look far for a set of policy solutions that — while far from a panacea and certainly not the only ones meriting consideration — would make significant inroads in promoting equal opportunity for all of the region’s residents.

Indeed, there are regional policy reforms in three areas that have been discussed for decades by the Wisconsin Policy Forum and others and that now should be revisited. These reforms are based on the premise that if we are to overcome past divisions, then we must think and act upon them as one region — not simply to aid disadvantaged parts of our metro area, but to help create an economy and quality of life that makes all of metro Milwaukee stronger.

In 1990, the Southeast Wisconsin Regional Planning Commission developed a concept for a seven-county regional transit authority to oversee and finance both local roads and transit. The RTA would have levied regional sales and gasoline taxes to replace property taxes as our local transportation funding sources, and in doing so would have generated the resources needed for a vastly enhanced array of truly regional transit services and an improved local road network.

The plan was voted down by six of the seven counties (Milwaukee was the lone supporter but only with amendments), and it remained buried for years. A three-county transit-only RTA was later considered as a means of financing and governing the Kenosha-Racine-Milwaukee commuter rail line, but that plan failed in Madison in 2010.

So why reconsider an RTA or regional transportation funding sources now? For one thing, that conversation would recognize that high-quality transit services that transcend municipal and county boundaries remain a key to giving central city workers access to suburban jobs. Equally important, such a plan acknowledges that a modern, first-class transit system should be financed on a regional basis given the broad economic benefits it engenders.

Metro Milwaukee’s pressing need for regional transit connections stems, in part, from its lack of affordable housing units in suburban areas that are close to industrial parks and other employment centers. Again, this is a problem the region has recognized for years but has failed to act upon. A 2013 SEWRPC regional housing plan contained dozens of recommendations aimed at expanding the supply of affordable housing near major employment centers and eliminating housing discrimination, but those have gained little traction.

The Wisconsin Policy Forum will soon release a report that catalogs and analyzes the city of Milwaukee’s affordable housing programs and compares them to peer cities. We provide several suggestions for improvement, including calls for less fragmentation, stronger leadership, and enhanced engagement between the city and private philanthropy. Yet, we also call out the reality that the city’s challenges are heightened by its huge burden to address this issue on its own while most other local governments in the region do little to encourage affordable housing within their borders.

Given the crucial role Milwaukee plays in the regional economy and the fact that it houses such a disproportionate share of the metro region’s low-income population, it would seem logical and fair for the entire region to support the city’s ability to use the economic advantages it does possess to help pay for its more formidable set of needed services. But it lacks that ability today.

Despite tens of thousands of daily non-resident commuters and millions of annual non-resident visitors to its entertainment and cultural venues, 2017 Forum research found that Milwaukee is the only one of 39 peer cities with populations between 300,000 and one million that relies solely on property taxes for its local tax revenue.

Most major cities in both red and blue states are able to consider general sales taxes, targeted sales taxes on items like entertainment or restaurant purchases, parking taxes, commuter taxes, and similar revenue options that recognize non-resident commuters and visitors are heavy users of municipal services who should help pay to support them.

Providing a similar range of options to Milwaukee — which would require state legislative approval that would be aided by regional backing — would not have to be seen solely as a mechanism for giving the city more money for ramped up services; it also could be coupled with requirements for property tax relief that would particularly benefit low-income renters and homeowners and enhance the competitiveness of Milwaukee businesses owned by people of color (though the impact of any new sales tax should also be considered).

Within each of these areas, there is considerable room for debate on the specifics of policy changes, such as how we should define our metro region (7-county, 4-county, or a narrower definition), how regional transit would be equitably governed, the proper balance between affordable housing sticks and carrots, and how to re-balance the city’s revenue portfolio in a manner that would promote equity without deterring economic growth. Also, it is important to acknowledge that this list omits K-12 education reforms and other areas ripe for potential equity-related policy changes, but only because they would not typically be pursued at the regional level.

It should also be noted that the economic consequences of the pandemic will exacerbate the difficult fiscal challenges already facing many local governments in the region, thus making it more difficult to preserve the resources they are currently devoting to services like transit and housing. At the same time, the dire economic circumstances facing so many of the region’s residents make it difficult to discuss new forms of taxation. Those factors may require a phased-in approach to some of the policy options cited above.

Still, the research has largely been done and the logic that once brought these policy areas to the forefront of public discussion is more compelling than ever. We have known for decades that addressing metro Milwaukee’s racial inequities will require a regional commitment and cooperation. Now it’s time to act.

Given its relevance to recent events, and in case our members missed it, we are reposting an op ed piece by Rob Henken that was published by the Milwaukee Journal Sentinel in its June 28 Ideas Lab section in lieu of this quarter’s traditional President’s message.