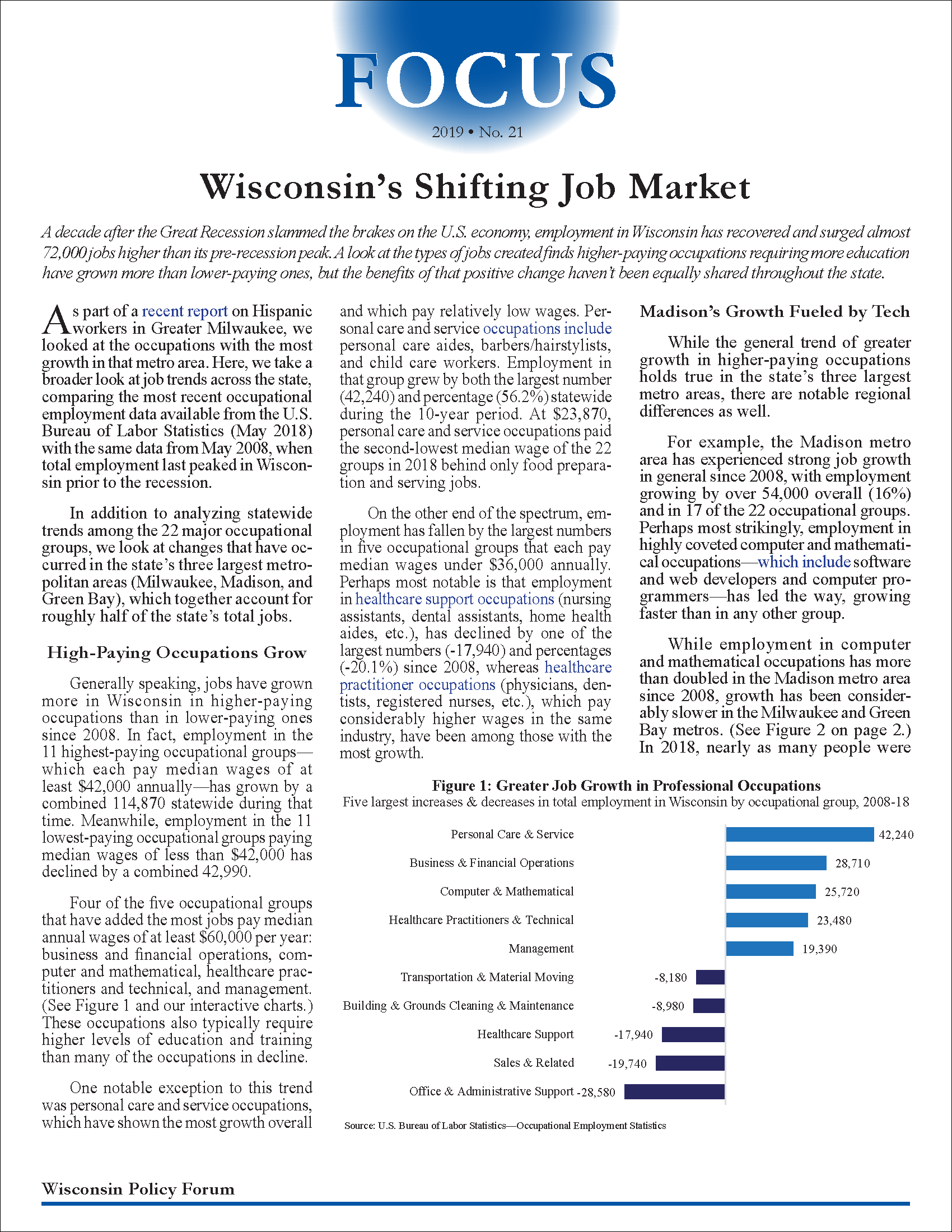 A decade after the Great Recession slammed the brakes on the U.S. economy, employment in Wisconsin has recovered and surged almost 72,000 jobs higher than its pre-recession peak. A look at the types of jobs created finds higher-paying occupations requiring more education have grown more than lower-paying ones, but the benefits of that positive change haven’t been equally shared throughout the state.

As part of a recent report on Hispanic workers in Greater Milwaukee, we looked at the occupations with the most growth in that metro area. Here, we take a broader look at job trends across the state, comparing the most recent occupational employment data available from the U.S. Bureau of Labor Statistics (May 2018) with the same data from May 2008, when total employment last peaked in Wisconsin prior to the recession.

In addition to analyzing statewide trends among the 22 major occupational groups, we look at changes that have occurred in the state’s three largest metropolitan areas (Milwaukee, Madison, and Green Bay), which together account for roughly half of the state’s total jobs.

Four of the five occupational groups that have added the most jobs pay median annual wages of at least $60,000 per year: business and financial operations, computer and mathematical, healthcare practitioners and technical, and management. (See Figure 1 and our interactive charts.) These occupations also typically require higher levels of education and training than many of the occupations in decline.

On the other end of the spectrum, employment has fallen by the largest numbers in five occupational groups that each pay median wages under $36,000 annually. Perhaps most notable is that employment in healthcare support occupations (nursing assistants, dental assistants, home health aides, etc.), has declined by one of the largest numbers (-17,940) and percentages (-20.1%) since 2008, whereas healthcare practitioner occupations (physicians, dentists, registered nurses, etc.), which pay considerably higher wages in the same industry, have been among those with the most growth.

While the general trend of greater growth in higher-paying occupations holds true in the state’s three largest metro areas, there are notable regional differences as well.

For example, the Madison metro area has experienced strong job growth in general since 2008, with employment growing by over 54,000 overall (16%) and in 17 of the 22 occupational groups. Perhaps most strikingly, employment in highly coveted computer and mathematical occupations—which include software and web developers and computer programmers—has led the way, growing faster than in any other group.

While employment in computer and mathematical occupations has more than doubled in the Madison metro area since 2008, growth has been considerably slower in the Milwaukee and Green Bay metros. (See Figure 2) In 2018, nearly as many people were employed in computer and mathematical occupations in the Madison area (24,490) as in the Milwaukee area (26,940), despite metro Milwaukee’s population and workforce being more than twice as large overall.

Milwaukee Shifts Away From Production Jobs

In the Milwaukee metro area, employment growth has been much more modest overall than in the Madison area, increasing by just 3,100 (or 0.4%) since 2008 and in only half of the 22 occupational groups.

While many of the occupations that have grown or declined the fastest in the Milwaukee metro area are the same as statewide, one notable difference is the substantial decline in production occupations, which are predominantly concentrated in the manufacturing industry. Employment in production occupations has decreased by 13,380 (or 13.3%) in the Milwaukee metro area since 2008, while production employment numbers grew in the Madison area and remained relatively flat statewide and in Green Bay. (See Figure 3.)

Despite the decline, in 2018, production occupations continued to employ the second-highest number of people in the Milwaukee metro area (87,020) among the 22 occupational groups. Still, the decrease in production jobs points to a gradual shift taking place in the region from manufacturing to other industries, including business, finance, and healthcare.

Since 2008, total employment in the Green Bay metro area has grown slower than in the Madison area but faster than in metro Milwaukee, increasing by 8,810 (or 5.3%). Making up a sizable portion of those gains were jobs in higher-paying healthcare occupations.

What It All Means

Our brief analysis of the types of jobs created in Wisconsin over the last decade brings positive news of a shift toward occupations that pay higher wages. The cautionary element is that those occupations also typically require higher levels of education and training.

This points to a need to continue to increase educational attainment in Wisconsin to meet future workforce demands. That is true not only at the state level but also in local areas. While Madison’s strong outcomes are driven in part by the types of employers concentrated there (state government, higher education, healthcare, and technology), its high concentration of college-educated residents is another major advantage. (In the Madison area, 44.8% of adults 25 and over have a bachelor’s degree or higher, compared with 34.5% in metro Milwaukee and 27.1% in the Green Bay area.) Spreading the benefits of the strengthening economy to other parts of the state likely will require increased college completion in those areas, which in turn may necessitate improved educational outcomes at the K-12 level.

As our previous research has pointed out, Wisconsin lags other states in attracting and retaining the most educated workers, who tend to be more mobile than other populations. Since attracting college graduates from other states seems to be a bigger problem for Wisconsin than retaining those who grow up here, strategies for addressing that issue are likely needed as well.

The growth in high-paying occupations in Wisconsin holds great promise if it can be sustained and distributed across multiple regions of the state. But continuing to produce those jobs—and the skilled workers to fill them—will require investment, effort, and foresight by state leaders.

"Invest in Wisconsin kids -- and the rest of our state: Open college savings accounts for every child" [1]Milwaukee Journal Sentinel
Source URL: https://wispolicyforum.org/research/wisconsins-shifting-job-market/