The Covid-19 Fiscal Fall-Out for Cities and Villages 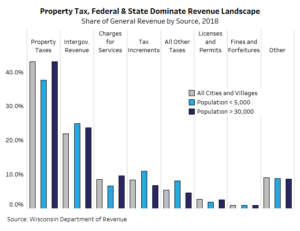 While it is too soon to project the full range of fiscal impacts to municipal governments resulting from the country’s economic crisis, certain key revenue streams will take a hit, including collections from fees, fines, and permits. Those governments that rely on tourism- and recreation-related fees and the small handful that are allowed to levy sales taxes likely will face daunting challenges. Wisconsin’s municipal and county governments clearly will not be spared from the financial havoc the COVID-19 crisis is wreaking on the nation’s economy. Compared to those in other states, however, local governments here possess distinct advantages that should help them weather the crisis. Still, all local governments here will suffer impacts and for some the effects will be immense. The advantages include reliance on a primary source of taxation (the property tax) that tends not to be as immediately impacted as other taxes by sharp economic swings; and sources of state aid that, for now at least, are written into the current state budget that runs through June 30 of next year. The Forum has warned in the past of the drawbacks of Wisconsin’s reliance on these two local revenue streams as opposed to a more diverse revenue portfolio. In this crisis, however, it may actually prove beneficial. Wisconsin municipalities and counties also may be aided directly or indirectly from the $150 billion allocation for state and local governments in the recently passed federal relief package. Yet, like virtually all segments of society and the economy, local governments in the state still will face daunting financial challenges. While the property tax is the primary source of tax revenue collected by cities and counties, 68 of the state’s 72 counties and a handful of municipal governments also collect sales taxes, which will decline sharply for the foreseeable future. Similarly, collections of certain user fees charged for items ranging from bus ridership to zoo admissions to building inspections – as well as fine collections from parking and other municipal violations – are likely to decline precipitously until American life is restored to some semblance of normalcy. Other challenges could include an increase in delinquent or unpaid property taxes and fees and a failure of revenues in tax increment districts to grow at levels needed to service debt. Furthermore, in many cases, local governments may not be able or willing to make spending cuts to offset those lost revenues since it would mean furloughing or otherwise impacting workers. In this report, we provide a broad overview of city and village revenues in Wisconsin and how they might be most affected by the COVID-19 crisis. In a follow-up report in the near future, we will undertake a similar examination of counties. Our analysis examines general revenues for cities and villages in Wisconsin, which likely include the majority of the revenues that could be most impacted by the current crisis. As reported to the state Department of Revenue by the municipalities, general revenues include property taxes, state and federal aids, charges for services, license and permit fees, fines, and more. They do not include the proceeds from bonds and other debt. The revenues included here flow into municipalities’ general funds as well as other core governmental funds such as those for libraries, debt payments, and capital projects. This analysis does not include what are known as proprietary funds, which generally include those city and village operations that are run more like businesses (e.g. water, sewer, and electric utilities). Though in many cases the revenues in these funds will be at least relatively stable, some could take moderate to substantial hits. For example, public utilities have been directed by an emergency order of the Public Service Commission to offer deferred payment agreements to customers, which particularly could impact cash flow for municipal-owned water utilities if large users avail themselves of that option. Other revenues most likely to be affected in just these funds include public charges for parking lots, ramps, and meters (totaling $65.4 million statewide in 2018), airports ($5.8 million), and mass transit fares ($29.7 million). Though not included in our main analysis, policymakers also should expect potential losses in these areas. The big picture Wisconsin has a relatively unique framework for financing its municipal governments, as we discussed in detail in our February 2019 report, Dollars and Sense. As we explained at that time: More than a century ago, Wisconsin made the choice to use state income and later sales taxes to provide aid to local governments while generally not allowing municipalities to levy those same taxes. Today, cities and villages in Wisconsin rely on the property tax to a greater degree than most states nationally and any other state in the Midwest region. As shown in Figure 1, 43% of the revenues taken in by Wisconsin’s 601 cities and villages to support general government functions in 2018 ($2.4 billion) came from the property tax. State aid and other intergovernmental revenues were the second largest source of income for cities and villages at $1.2 billion, or 22%. Of that amount, more than half ($674 million) was from the state’s shared revenue program, which is a form of aid provided to local governments that they can use at their discretion. About $224 million came from state highway and road aids, while federal aids comprised about $95 million of the intergovernmental total. Cities and villages received $3.5 billion in combined total state aids and property tax revenues in 2018, or 62% of their total revenue. Ironically, while previous Forum research has pointed to the disadvantages associated with such heavy reliance on just these two revenue sources, this circumstance may be fortuitous for Wisconsin municipalities as they prepare for the fiscal impacts associated with the COVID-19 crisis. Unlike sales and income tax collections, which can plunge quickly and dramatically during an economic recession because of a sharp rise in unemployment and drop in consumer spending and income tax withholding, property tax collections tend to take a longer time to decline if they do so at all. … Continue reading The Covid-19 Fiscal Fall-Out for Cities and Villages

Copy and paste this URL into your WordPress site to embed

Copy and paste this code into your site to embed