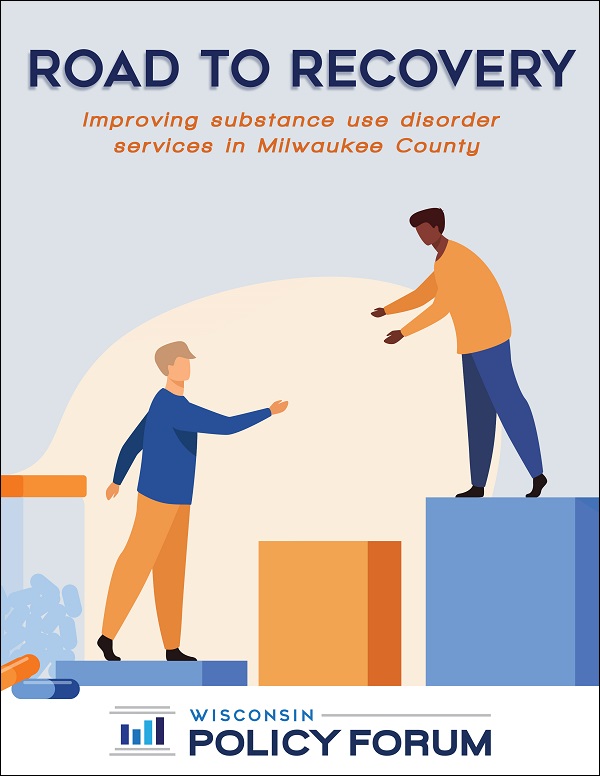 The challenges associated with alcohol and substance use disorders in Wisconsin and Milwaukee County are well-documented and severe. With regard to alcohol, according to the Wisconsin Department of Health Services (DHS), Wisconsin ranked third in the nation in 2019 in the percentage of adults who said they had engaged in binge drinking in the past month (21.9%). Meanwhile, Wisconsin Policy Forum research has shown recent increases in alcohol-related driving deaths in Wisconsin during the pandemic and in total alcohol-related deaths over the last two decades. In Milwaukee County, alcohol was the cause of 63.2 deaths per 100,000 residents from 2014-2019, well above the statewide average of 49.

The situation is equally alarming when it comes to other forms of substance use disorders. According to DHS, between 2014 and 2020, Wisconsin had 6,845 drug overdose deaths. Most involved opioid overdoses (5,338), but multi-drug overdoses (some of which included opioids) were the second most common cause of deaths in that period (3,101), followed by heroin, cocaine, and methamphetamines. Also, it is important to note that fentanyl – a highly dangerous synthetic opioid – has become a leading cause of overdose deaths, and it is often ingested unknowingly when it is mixed with other drugs.

Milwaukee County’s Behavioral Health Services (BHS – formerly known as the Behavioral Health Division, or BHD) has led efforts to combat substance use disorders in the county for decades, serving as both a direct service provider and as a coordinator of services provided by dozens of community agencies. BHS’ Community Access to Recovery Services (CARS) program manages the division’s wide range of integrated mental health and substance abuse services, administering a full array of supportive and recovery-oriented services to more than 10,000 Milwaukee County residents each year.

But BHS is not alone. Several major health systems provide a range of substance use disorder (SUD) services in the county, and the opioid challenge also has emerged as a priority for several of the county’s 11 municipal health departments, emergency medical service providers, and a range of health care-related entities and community organizations that fall outside of the CARS umbrella.

BHS now has an opportunity to fortify its programming and amplify its leading role in the overall county-wide effort to effectively address SUD prevention, treatment, and recovery. Wisconsin stands to receive more than $400 million as part of a national legal settlement related to opioid abuse with several major drug distribution and manufacturing companies, and Milwaukee County expects to receive more than $70 million from those payments. The county also may be able to access significant funding amounts to support its SUD programming from other new federal sources, including the federal Medicaid program.

To ensure that these substantial infusions of federal and state resources are spent wisely and effectively, BHS leaders approached the Wisconsin Policy Forum in late 2021 for assistance in enhancing understanding of the SUD provider landscape in the county – both for itself and for other stakeholders and the general public.

The Forum is well-equipped to provide such assistance. Our 2013 report, Assessing the Financial Outlook of Milwaukee County’s Behavioral Health Division, analyzed BHS’ finances as the county prepared to redesign its mental health services and respond to the opportunities provided by the Affordable Care Act (ACA). We have also co-authored a series of reports to provide independent perspective on the county’s mental health and SUD programming, including a landmark 2010 mental health redesign report and subsequent follow-up studies on outpatient capacity and crisis services.

In this report, we seek to provide greater clarity on the SUD service provision landscape in the county with an eye toward identifying service gaps and priorities for new investment. We conducted dozens of interviews with officials and staff from BHS, community-based providers that are part of its service network, private health system leaders, and other stakeholders. Using these extensive interviews and review and analysis of comprehensive data received from BHS and providers, we conclude by sharing a series of insights that we hope will provide guidance to BHS and its partners as they seek to forge a more robust response to SUD challenges in Milwaukee County.