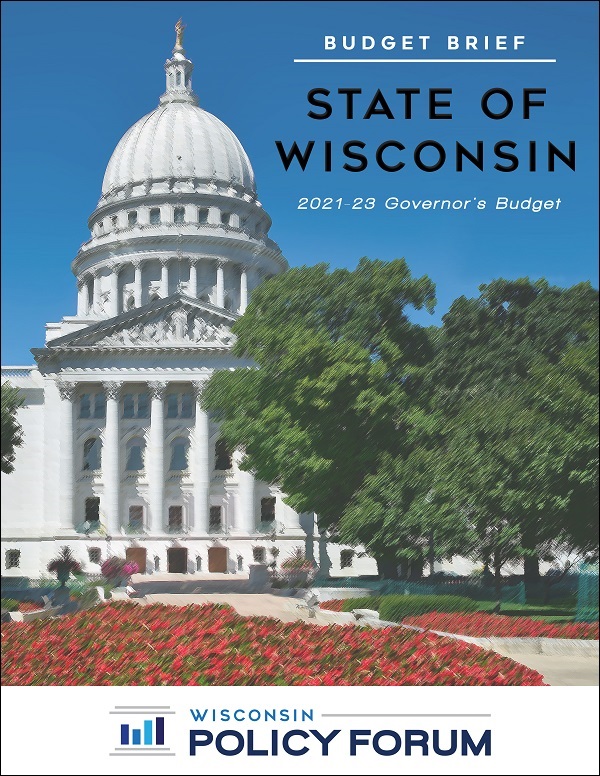 The state of Wisconsin is experiencing a crisis unlike any in generations, with 6,500 dead so far from the COVID-19 pandemic, unemployment still elevated, and many small businesses in dire circumstances. The pandemic slowed state tax collections, sent hundreds of thousands onto Medicaid health care and unemployment programs, cut prison populations, and lowered public school enrollments. Yet despite these sizable challenges, the state’s budget has held up relatively well and billions of dollars more in federal relief is coming.

In response, Gov. Tony Evers’ proposed 2021-23 state budget recommends tax cuts targeted to low income families and caregivers; a surge in state spending on education, social services, and pandemic relief; and additional revenues for local governments and schools. He proposes to pay for these initiatives with federal dollars from Medicaid expansion, a combination of tax increases that collectively would be the largest in 12 years, and what is projected to be the largest drawdown of state reserves in decades, though the state would still maintain a record rainy day fund balance.

The proposal would deliver a substantial increase in aid to families, schools, local governments, and affected businesses in the short term amid the pandemic, which has created extraordinary needs. It also would mean higher taxes for upper income individuals and some businesses and fewer resources available to the state over the longer term to address lingering challenges from COVID-19.

The governor says the hardship of the moment calls for a comprehensive response from the state. The Legislature’s Republican leaders in turn have already criticized the elevated spending and additional taxes, saying these costs will impose a different sort of burden on the state. These political differences may add to the difficulties within the state budget process.

Yet so far, the state’s financial picture has generally lightened from the early days of the pandemic, as federal relief funds have helped alleviate spending pressures and vaccines have provided hope for the future. Much is unknown or may change. But the massive infusion of additional federal aid being approved this week could absorb much of the remaining difficulties– one early estimate placed it above $5 billion for state and local governments in Wisconsin.

In this report, we seek to explain the governor’s proposal in its broad sweep but also hone in on the budget fundamentals that will have to be dealt with even if GOP lawmakers reject key provisions of the Evers bill. Our hope is to provide greater understanding of the state’s financial picture and to promote thoughtful deliberations as policymakers wrestle with thorny budget decisions at a critical moment in the state’s history. Continue reading…