Turnout for Wisconsin’s nonpartisan spring elections tends to be about half that for fall partisan races. The drop-off may be due in part to a lack of competitive races for county, city, village, town, and school board offices. However, this year’s spring ballot features an open state Supreme Court seat and nearly $600 million in school district borrowing referenda. 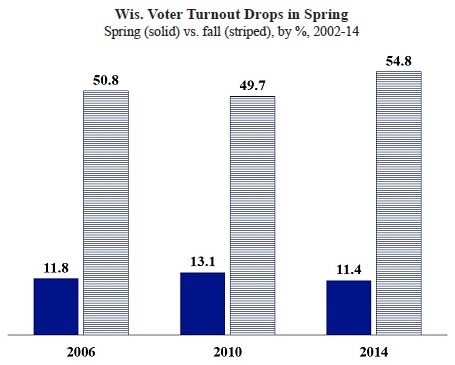 Wisconsin’s nonpartisan spring elections tend to be low turnout affairs. Although Badger State turnout for fall presidential elections usually is among the highest in the nation, it declines significantly in non-presidential years and drops even more in the spring. Generally, about one-fourth as many eligible voters make it to the spring polls as in the fall (see chart below).

What is responsible for the drop-off? It may be due partly to the perceived importance of the offices involved. In the fall, voters elect the president or governor, state lawmakers, and members of Congress, which are often viewed as high-stakes races. The names and offices on the spring ballot are less familiar.

Another factor may be lack of competition. Voters who do not have a choice of candidates are not as likely to view the election as important or go to the polls.

There is no specific data source to reveal how many local races go uncontested statewide each spring, but surveys and anecdotal evidence indicate the number is substantial and increasing.

In a 2017 survey by Wisconsin Policy Forum researchers, officials in 52% of 188 cities and villages said they averaged zero to one candidate per seat over the past three years. Only 4% reported an average of two or more candidates per seat.

The lack of competition for these offices cuts across rural and urban communities. In municipalities with 15,000 or more residents, only 5% said contested races were the rule. Small communities reported about the same, with only 4% of seats regularly contested.

The trend appears to be getting worse. Among the municipal officials surveyed, 46% said that competition for governing boards has decreased over the past five to 10 years. Only 11% said competition had increased.

It is usually more difficult to explain why something does not happen than why it does, but the municipal officials suggested the dearth of local candidates may be due to several factors: apathy; lack of information or civic education about the role of local governments; family commitments and economic pressures; perceptions of a hyper-partisan political environment; and, on a positive note, general satisfaction with current leaders and an absence of any burning local controversy. As one official put it, “Our residents see effective government and feel it is not necessary to run for office.”

The stakes this spring

Despite these observations, this spring will feature a number of contested seats. The highest-profile race will be for the first open seat on the state Supreme Court in more than a decade. Voters in the February 20 primary will narrow the field from three candidates—Madison attorney Tim Burns, Milwaukee County Circuit Court Judge Rebecca Dallet, and Sauk County Circuit Court Judge Michael Screnock— to two. The April 3 general election will determine who will serve a 10-year term on the state’s highest court. (For more on the race, see the January issue of The Wisconsin Taxpayer)

There are also scores of other races that may impact local decision-making and voters’ daily lives. 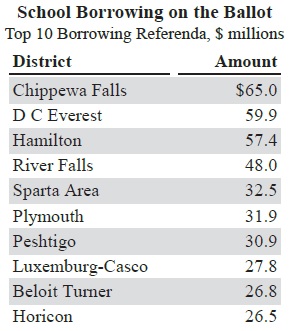 Supervisors in all 72 counties are up for election this spring, but many seats are uncontested. Among larger counties, there are contested races for roughly one-fifth of the seats, including seven of Milwaukee County’s 18 seats; seven of 26 seats in Brown County; six of 21 in Racine County; nine of 23 in Kenosha County; and 8 of 36 in Outagamie. At the other end of the spectrum, in Winnebago County, only two of 36 seats are contested, while three have no candidate.

Additionally, voters will choose county executives in Manitowoc and Portage counties. Kenosha County Executive Jim Kreuser is running unopposed. Also on the ballot are city, town, village, and school board seats, including many that are uncontested.

The biggest financial impact of this spring’s elections may be felt by taxpayers in school districts where referenda to borrow money or exceed state-imposed revenue limits are on the ballot. Thirty school districts are asking spring voters to approve borrowing a total of $596.3 million (see table, right). Twenty-six districts are seeking $109.4 million in time-limited exemptions from state-imposed revenue caps, and seven districts are asking for $6.3 million in ongoing exemptions from the caps. Voter approvals of referenda have risen from about 50% during 1995-2010 to roughly 75% in recent years.

For spring voters, the payoffs are shorter lines and a vote that counts more than in high-turnout elections. When only a few hundred ballots are cast, a handful may decide the outcome. Also, the consequences of spring elections should not be overlooked. National elections may determine issues of war and peace, but local races often decide quality-of-life issues such as property tax increases, construction of new schools, infrastructure improvements, and economic development.