A recently announced legislative task force will spend 2018 studying Wisconsin’s school funding formula, which has not undergone major change for about 25 years. The committee will explore issues of both equity and adequacy, areas where Wisconsin typically outperforms other states. However, that has come at a price of increased complexity. Is there a way to simplify?

The commission will explore the distribution of state tax dollars to K-12 schools because, according to Senator Olson, “a thorough analysis is necessary to ensure the process is transparent, equitable and delivers excellent schools”

The group will face a variety of questions. Do state-mandated revenue limits allow historically low-spending districts to generate sufficient financial resources? In its current form, does the state aid formula distribute resources “fairly?” And, what is the impact of shifting school aid from equalization aid, which provides more state dollars to poorer districts than richer ones, to a uniform per pupil allocation?

These are just a few of the difficult issues the committee faces, and answers will not be easy. A look at school finance here versus other states provides perspective.

School finance systems are typically compared in two broad areas: adequacy and equity. In other words, are we providing sufficient resources to educate students, and are those resources distributed equitably?

Annual figures from Education Week (EW) shed light on how Wisconsin’s system stacks up with those in other states.

In its 2017 report (2014 spending), Wisconsin’s ranks on these measures ranged from 15th to 24th. To simplify the analysis, we statistically combined the four measures, creating a single figure to compare states. On that combined measure, the Badger State ranked 16th.

Among neighboring states, only Illinois (13th) ranked higher. Iowa, Michigan and Minnesota were in the top half.

Wisconsin’s adequacy rank has dropped slightly of late. In the 2012 report (2009 data), the state ranked 12th on the combined adequacy measure.

Equitable distribution? EW researchers also examine four measures of equity, each focusing on a different aspect of resource distribution. The Badger State rates high on all four, ranking between 5th and 18th. When the measures are combined, only eight states rank higher on equity, including neighboring Iowa.

As with adequacy, Wisconsin’s equity rank has dropped slightly over the years. In the 2012 report, the state’s overall equity ranking was 5th. 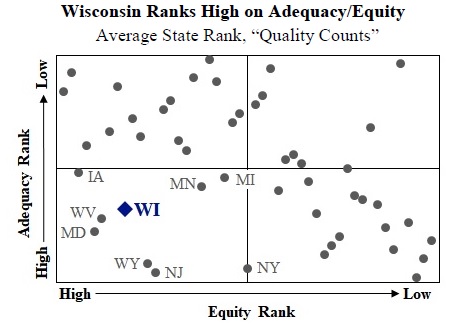 A tradeoff? Illinois ranks 46th in equity and highlights a common tradeoff between adequacy and equity (it ranked 13th on adequacy). States that rank relatively high on adequacy typically rank low on equity (bottom right square in chart), and vice-versa (top left square).

Wisconsin is one of only nine states that rank in the top half on both measures, and one of only five ranking in the top 16 on both. The others were Maryland, New Jersey, West Virginia, and Wyoming. In other words, while Wisconsin has its school finance challenges, its system compares favorably to those in nearly all other states.

However, where Wisconsin may lag is in school finance transparency. After years of layering new programs and funding methods on top of one another, Wisconsin’s school finance system has become a challenge to understand, even for school officials and board members who deal with it daily.

In an indication, perhaps, that some lawmakers have become frustrated with the complexity of the equalization aid formula, both the Governor and Legislature have, in the last four budgets, turned to a simple per pupil allocation to distribute additional school aids. While the approach is far simpler, it is not clear that the approach is the most equitable way to fund schools.

For the average citizen, school finance has become a labyrinth. And yet, these same taxpayers are asked to vote on referenda asking for additional school spending. Over the past five years, citizens in 271 districts voted on 513 referenda to increase local school spending. This spring, voters in another 27 districts will tackle 35 referenda.

Task force members will have a lot on their plate. But, while addressing issues of adequacy and equity, they also might weigh the merits of simplifying the system, thus helping to create a better-informed citizenry.

Some questions task force members might ask themselves include: Can I adequately explain Wisconsin school finance to the average citizen in a few paragraphs or PowerPoint slides? If not, are there changes that will make that possible while still maintaining the many positive attributes in our system?