On the Ballot: The Fate of Wisconsin’s State Treasurer

The April 3rd election ballot asks voters to consider amending the state constitution to abolish the state treasurer’s office. In recent decades, lawmakers and the governor have transferred most of the treasurer’s duties to other state agencies. If voters approve the amendment, Wisconsin would join five states that have eliminated or merged the treasurer with another office.

Among the decisions voters will make in the April 3rd election is whether to amend the state constitution to abolish the office of state treasurer, a position dating from Wisconsin’s territorial days.

Supporters of the amendment, who include incumbent Matt Adamczyk (R), contend that changes in state law over the past two decades have made the office largely obsolete and eliminating it would save money.

Opponents, including former Treasurer Jack Voight, argue the amendment would remove an independent voice from the Board of Commissioners of Public Lands, whose three members include the treasurer.

Wisconsin created the office of territorial treasurer in 1839, then established it as a partisan statewide elective position in 1848 with the adoption of the state constitution. For the next 120 years, the treasurer was elected to a two-year term; the constitution was amended in 1970 to establish the current four-year term.

The treasurer’s duties were once extensive. In 1930, the treasurer had “custody of all state funds,” received “all moneys paid into the treasury,” and issued “checks in payment of all claims.” At the time, the treasurer was responsible for directly collecting taxes, personally depositing checks, and withdrawing funds from the state treasury.

Over the years, these duties were transferred to other state agencies, with the biggest changes coming in the past two decades.

The 1995-97 budget bill unsuccessfully proposed moving the treasurer’s office to the Department of Ad- ministration (DOA); lawmakers and the governor instead eliminated the section responsible for holding state securities and transferred those duties to the State of Wisconsin Investment Board. Two years later, lawmakers and the governor transferred the Di- vision of Trust Lands and Investment to DOA.

In 2003, cash management functions were moved to DOA, followed by the college savings program, college tuition prepayment program (EdVest), and the Local Government Investment Pool (LGIP) in 2011. In 2013, the Unclaimed Property Program was transferred to the Department of Revenue (although the treasurer remains responsible for promoting the program). Finally, in 2015, the assistant state treasurer’s position was eliminated.

The treasurer’s most significant remaining duties include serving as one of three members of the Board of Com- missioners of Public Lands (BCPL), along with the state attorney general and secretary of state. The BCPL generates investment income for schools and libraries, loans money to local governments for public purpose projects, and manages 77,000 acres of state forests in northern Wisconsin. 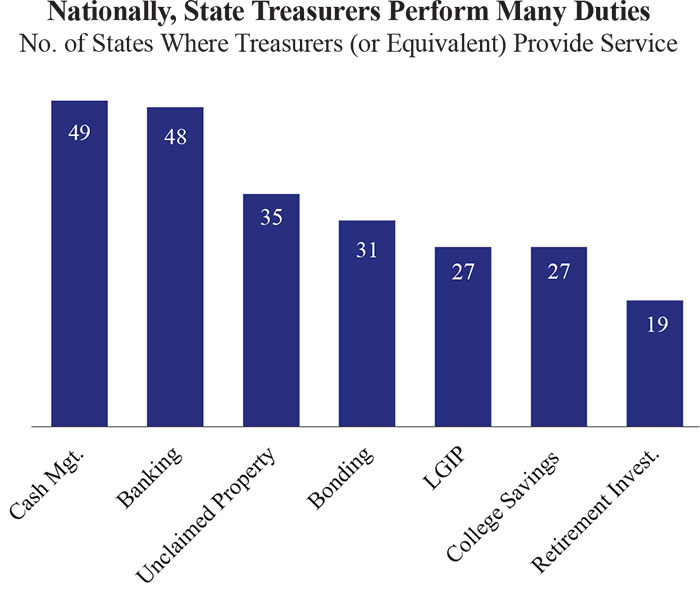 If the amendment is approved, the lieutenant governor would replace the treasurer on the BCPL. Opponents of the amendment argue the move would undermine traditional checks and balances and further concentrate power over BCPL assets in the governor’s hands. They contend this could ease the way for efforts to eliminate two major BCPL programs that have been legislative targets in recent years: the Common School Fund and the State Trust Fund Loan Program, resulting in less money for schools, libraries, and municipalities.

Treasurers in other states

The April 3rd vote is the last step in the multi-year process of amending Wisconsin’s constitution. Like other amendments, the proposal was passed by both houses of the legislature in two successive sessions before being placed on the statewide ballot. It must be approved by a simple majority of voters.

Five other states–Florida, Minnesota, Montana, New York, and Texas–have merged their state treasurers with other offices.

The treasurer’s role varies widely by state, but officials elsewhere have considerably more duties, as shown in the chart on page one. Only Wisconsin does not place its treasurer in charge of cash management, and only North Dakota’s and Wisconsin’s treasurers are not responsible for their states’ banking services.

In most other states, the office is also responsible for unclaimed property (35), bonding (31), administering college savings plans and local government investment pools (27 each). In less than half the states (19), treasurers also oversee retirement investments.

As noted, treasurers in other states also share some duties with other officials, such as a comptroller (or controller) or auditor, who may be either elected or appointed. In Wisconsin, the controller is housed in the Department of Administration, while the nonpartisan Legislative Audit Bureau carries out the state’s audit functions.

◾ All 45 states with a sales tax are supporting a brief asking the U.S. Supreme Court to hear a Colorado case that could allow states to tax all online purchases.

Observers say the case could overturn two prior Supreme Court decisions that permit states to collect sales taxes only on retailers with a physical presence, or nexus, in the state. Many national retailers already collect the taxes, but some smaller retailers still do not.

◾ Want to be the first to know about the latest research, events, and more from the Wisconsin Policy Forum? Please register your email at: wistax.org/join