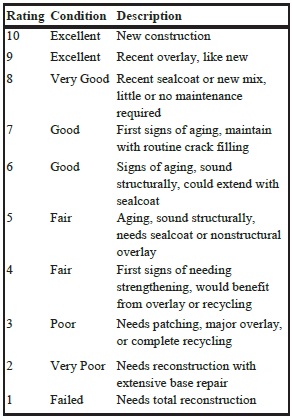 Every two years, cities and villages provide updated data to the state on the condition of their streets. Local officials visually inspect the condition of the roads by looking at their surfaces, cracks, and deformities. The road segments are then rated on a 10-point scale with seven different categories ranging from “excellent” to “failed.” (See the box) These ratings, housed within the Wisconsin Information System for Local Roads (WISLR), provide a snapshot of the quality of local streets statewide.

We compared WISLR data from 2010 and 2017, looking at the roads in all of the state’s nearly 600 cities and villages. These communities are home to about 70% of the state’s population and about half of the local roads. In examining the data, we found a decline in highly-rated streets and a corresponding increase in roads rated “fair.” 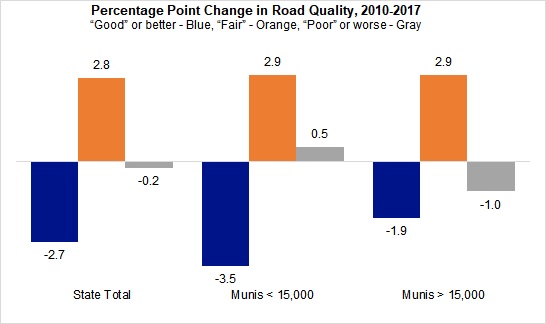 What do the numbers mean?

While we cannot draw definitive conclusions, these findings suggest failing roads may have been rehabilitated or reconstructed at a steady pace, but newer, higher-quality roads were deteriorating more quickly than they were receiving maintenance. Consequently, a portion of those roads dropped into the “fair” category.

If that indeed was the case, then such practices could add to the fiscal challenges facing municipalities because maintenance delays can shorten the time frame between needed reconstruction projects. Resurfacing a municipal road may cost around $600,000 per mile, while total reconstruction can be well over $2 million per mile. Though delaying road maintenance may save money in the short term, it can cost local governments and taxpayers in the long run if roads need to undergo costlier reconstruction sooner than they would have had routine maintenance been performed.

The smallest municipalities saw the largest reduction in the share of roads rated “good” or better. When looking at cities and villages with fewer than 15,000 residents, 68.9% of roads were rated “good” or better in 2017, down from 72.4% in 2010. In cities and villages with more than 15,000 residents, the share of streets rated “good” or better dropped from 68.3% to 66.4%. The Wisconsin Policy Forum has found that smaller communities are experiencing less growth in new construction and property tax revenues, and as a result may face greater budget constraints. The greater decline in road quality in smaller communities may in part reflect these fiscal challenges.

In the near term, municipalities may benefit from the 2017-19 state budget, which increases state road and bridge aids by $86.9 million. These increases were funded in part by delaying projects on state highways. If the increases cannot be sustained, then more municipalities may look to other local revenue sources, such as vehicle registration fees, or wheel taxes, as explored in our recent issue of Focus.

When looking at all rated roads within the state, not just the half located within cities and villages, the overall trend is very similar. When including other segments such as town and county roads, 67% of those with ratings in 2017 were classified as “good” or better, down 2.7 percentage points from the previous year, which is the same decline seen for city and village roads. Statewide, roads rated “fair” and “poor” or worse followed the city and village trends as well.

While the Department of Transportation keeps the data on road segments and total mileage, the roads are actually rated by local officials. There are more than 100,000 miles of local roads in Wisconsin and the DOT only audits and verifies a relatively small portion of them.

It is unclear how these road segments would affect the ratings. Our analysis does indicate, however, that smaller communities in Wisconsin still have somewhat better quality streets than larger ones, but their proportion of higher-quality roads is declining. If that is a reflection of reduced maintenance, then long-term road costs could grow.