How should local governments respond to declining transit ridership?

Bus ridership has decreased for most large transit systems in Wisconsin in recent years, following a national trend. So far, local governments have found ways to make up for lost fare revenue and avoid service reductions, though that may become more difficult if the trend continues. Research shows ridership declines worsen as transit services are cut. 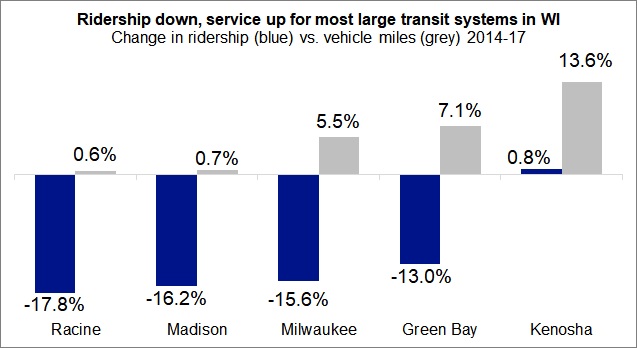 But the latest ridership data from Wisconsin’s five largest transit systems appear to contradict at least part of that orthodoxy. Between 2014 and 2017, each system increased service overall as measured by total vehicle miles traveled, yet ridership declined among four of the five. (See chart)

Wisconsin’s losses were part of a national decline in mass transit ridership, but in many communities they were greater than the national average.

According to the Federal Transit Administration, transit ridership peaked nationally in 2014 at roughly 10.7 billion total trips before dropping to around 10.0 billion trips in 2017, a 6.4% decline. Bus ridership on Green Bay Metro, Madison Metro Transit, the Milwaukee County Transit System, and Racine’s Belle Urban Systems all dropped at least twice as fast as the national average. Kenosha Area Transit was the only system to gain riders, for reasons that are unclear.

What forces may be driving decreased transit ridership? The strengthened economy, relatively low gas prices, and the rise of ride-hailing services are seen as possible factors nationally.

According to the Bureau of Labor Statistics, Wisconsin’s seasonally-adjusted unemployment rate fell from 6.1% in January 2014 to 3.1% in January 2018. As a result, some transit riders who are newly employed or earning higher wages may have purchased vehicles or chosen to drive more often. Wisconsin DOT data show the number of vehicles registered in the state increased from 5.6 million in 2013 to 6.0 million in 2017.

Federal Highway Administration data also show driving is on the rise again in the U.S. The total number of miles driven nationally was virtually the same in 2013 as in 2005 but increased 7.4% between 2013 and 2017.

Relatively low gas prices may be another factor. According to the U.S. Energy Information Administration, the average price of gasoline has increased over the last two years but remains substantially lower than in 2014.

Ride-hailing services like Uber and Lyft, which have grown dramatically since the recession, may also play a role. While transit systems and ride-hailing companies have formed partnerships in some places to boost usage, multiple national studies suggest that ride-hailing also is competing with transit in many places. For example, a recent survey by the Metropolitan Area Planning Council in Boston found that 42% of the region’s ride-hailing trips would have been replaced by transit if ride-hailing was not available. 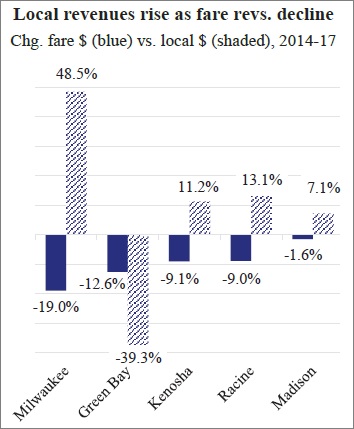 Lower ridership puts pressure on local governments to raise fares, find other revenue sources, or cut services. Between 2014 and 2016, the last year for which data is available, all five of Wisconsin’s largest transit systems lost fare revenue.

Increased local funding, primarily through property taxes, appears to be one way transit systems have avoided service cuts and actually increased service. Between 2014 and 2016, four of the five largest transit systems in Wisconsin increased local revenue for transit, including a nearly 50% increase for the Milwaukee County Transit System. Fares have increased in some communities as well.

If ridership is down, why not cut services? Both past experience and research suggest cutting services likely would create a downward spiral.

Between 2000 and 2010, the Milwaukee County Transit System cut routes and service frequency. As a result, the transit system’s total service (vehicle miles traveled) dropped 21.2%, from 22.2 million miles to 17.5 million. While other factors may have contributed, ridership decreased 29.4%, from 52.9 million rides to 37.5 million.

Academic research also has found similar links. A recent study of the 25 largest transit systems in the U.S. and Canada found service levels and car ownership are the strongest determinants of transit ridership.

It is surprising and encouraging that four of the state’s five largest transit systems were able to add local revenue and all five increased service levels as fare revenues declined in recent years. Whether these trends will continue is uncertain, but the stakes are high given that service cuts may further reduce ridership.