The planned Foxconn manufacturing complex in Racine County is requiring state and local leaders to rethink long-standing policies about infrastructure, jobs, economic development, and municipal service boundaries. At the recent Wisconsin Policy Forum annual meeting, a panel of speakers discussed the major changes Foxconn is expected to bring to transit and transportation.

The scope and complexity of the enormous Foxconn development in Racine County is requiring state and local leaders to adopt new approaches to numerous issues.

From expanding state tax incentives and altering tax-incremental finance laws to finding ways to satisfy the plant’s demand for water, the prospect of creating a “silicon prairie” of high-tech manufacturing and support firms in Wisconsin is upending long-standing political and business orthodoxies. 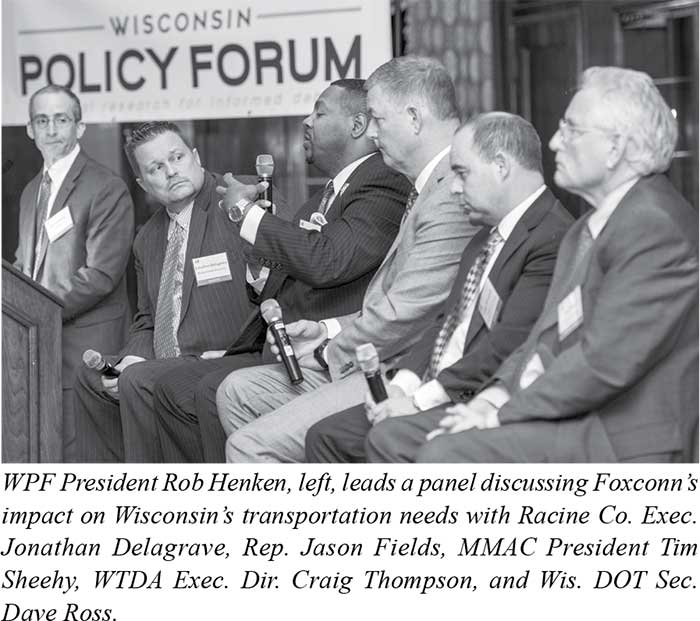 Foxconn is “disrupting our way of life, but in a very positive way,” MMAC’s Sheehy said. “When it comes to thinking about transportation and transit, they’re well ahead of where we are as a region and they’re going to pull us in that direction.”

Foxconn will have far-reaching impacts on highways, mass transit, and new transportation technologies such as autonomous vehicles, the speakers said. The challenge will be how to accommodate those demands given current fiscal and legislative constraints.

Even before Foxconn arrived, the I-94 corridor through southeast Wisconsin was the focus of a multi-billion-dollar “megaproject” for more than a decade, DOT’s Ross said. Completion of various phases have been delayed as state officials juggled them with other statewide projects.

Combined revenues from the state’s two major transportation fund sources, gas taxes and vehicle registration fees, have changed little in recent years (see chart at right), rising more slowly than inflation. WTDA’s Thompson and MMAC’s Sheehy said the need to finish the “megaprojects,” as well as improvements elsewhere, highlight the need for new revenues. Ross, however, said “the political reality is there is no interest whatsoever” in raising the gas tax, vehicle registration fees, or other state or local revenue sources.

The Foxconn tax incentive legislation approved last year includes $252.4 million in borrowing to complete the final phase of the North-South corridor between the Illinois state line and Milwaukee. But that borrowing depends on Wisconsin receiving a $246.2 million federal grant that will be awarded later this year. The project was originally scheduled to be finished by 2015. 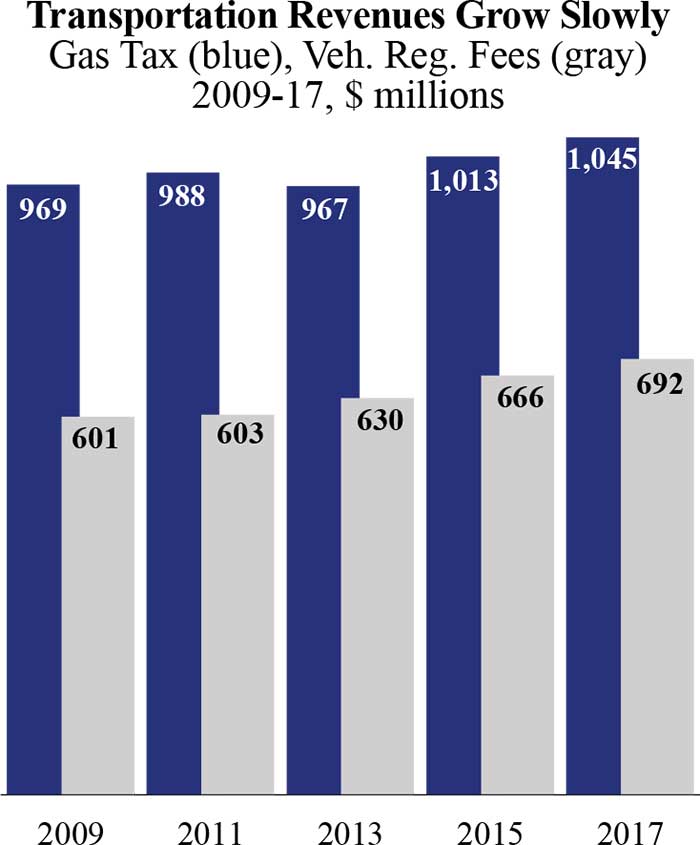 Meanwhile, state highway and local road improvements to Foxconn are being leapfrogged ahead of other state projects. The nonpartisan Legislative Fiscal Bureau reported recently that the nearly $90 million the state has shifted to support local Foxconn-related improvement and construction projects limits the funding that could go to projects elsewhere in the state.

Getting Foxconn’s projected 13,000 employees to and from work will also require new approaches, the speakers said. Fields said solutions may involve everything from shared transit routes to housing and job training programs, as well as public and private-sector partnerships.

Racine County’s Delagrave said new forms of local government collaboration could accomplish many of the same goals as creating a regional transit authority, which remains unpopular with state lawmakers. Foxconn is already spurring such cooperation on a variety of issues, he added.

According to Sheehy, the dispute over regional transit has in the past boiled down to who will pay for it. “To borrow from architecture, I think this is a case where form follows function. The economy in this region functions without regard to borders. The laborshed we’re all going to draw from is going to pull us together as a region.”

◾ Indiana Gov. Eric Holcomb (R) is expected to sign legislation exempting “software as a service” from the state sales tax. The bill would apply to transactions in which users purchase, rent, lease, or license the right to remotely access pre-written computer software.

A growing number of software makers are marketing their products on a subscription or licensing basis, rather than an outright purchase.

◾ Gov. Walker (R) has appointed his chief of staff, Rich Zipperer, to the Public Service Commission. Zipperer replaces Ellen Nowak, who became Secretary of Administration earlier this year. Eric Schutt, who had been Walker’s chief of staff from 2011 to 2015, will return to the post from a private-sector job.