Two key financial documents appear to paint conflicting pictures of state finances in 2017. Accounting differences explain much of the discrepancy between a positive $579 million budgetary balance reported in the AFR and a negative $1.6 billion GAAP balance in the CAFR. While still a concern, the GAAP figure has improved in recent years because of higher budgetary balances.

Questions of surplus or deficit in Wisconsin’s state budget arise annually. For 2017, how does one reconcile competing claims of a $579 million “surplus” and a $1.6 billion “deficit?” Two reports that summarize state finances provide answers.

The state publishes two documents detailing its finances: The Annual Fiscal Report (AFR) and the Comprehensive Annual Financial Report (CAFR). They differ in two important ways. The AFR essentially is a budgetary document that uses fund definitions set in state law and cash accounting. The CAFR is an accounting document that uses fund definitions from the Governmental Accounting Standards Board and accrual accounting (generally accepted accounting principles, or GAAP).

In the AFR, the general fund consists of spending derived primarily from state income, sales, and excise taxes which totaled about $16 billion in 2017 (see table). The CAFR general fund also includes fees, charges, and federal aid. In 2017, revenues totaled just over $25 billion.

With regard to accounting methods, the difference is best explained using a household example. Sue spends $500 on Christmas presents using her credit card. She pays the bill when it arrives in January. Under GAAP accounting, the expenditure occurred in December when she made the purchase; under cash accounting, it occurred in January when she paid the bill. This distinction is critical to reconciling the competing budget claims.

Despite their differences, the AFR and CAFR agree that 2017 spending was less than revenues. In other words, the state ran a surplus, in the traditional meaning.

This is unusual. In the 17 years from 2001-17, the state reported an AFR surplus in just seven years, and a CAFR surplus in six. In years of deficit (spending exceeding revenues), the state pays for spending by drawing down balances. 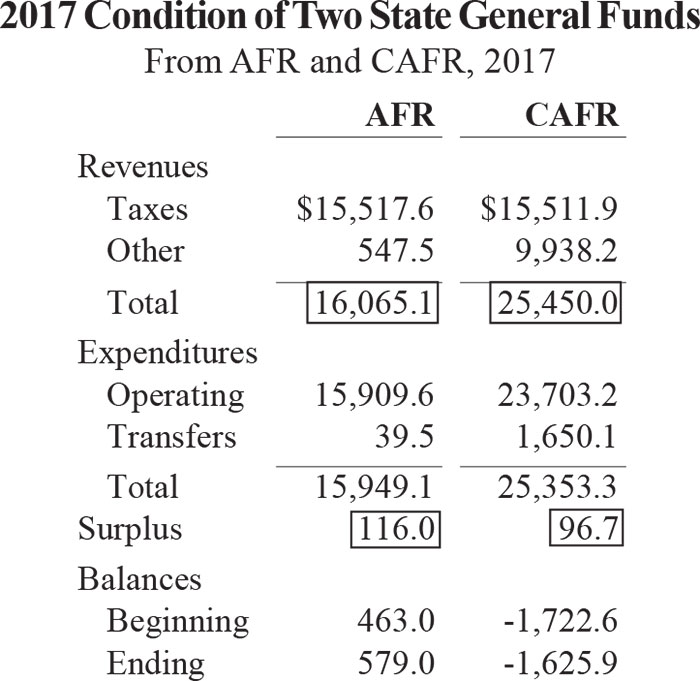 The state’s balances often are mislabeled as surpluses or deficits, but they are neither. Like individual savings, they are accumulations of annual spending decisions. When Sue spends less than she earns in a year, her savings increase.

Her current savings account balance is a reflection of all past financial decisions.

Wisconsin’s $579 million balance in its budgetary general fund is a cumulation of annual surpluses and deficits, including its 2017 surplus. The state has a history of keeping this balance relatively small. For example, in both 2000 and 2013, balances totaled more than $750 million. Over the ensuing two years, the state used most of the savings to pay for ongoing spending.

The GAAP balance reported in the CAFR has been negative since Wisconsin first began calculating it in 1990. In that year, the primary reason was timing issues with state aid and property tax credit payments to local governments.

About 43% of the 2000-11 decline was caused by income tax withholding that was not regularly updated, resulting in growing tax refunds. Under GAAP, refunds are accounted for in the year the income was earned as opposed to when the refunds are issued (cash accounting).

Another quarter was caused by shifts of increased property tax credits to the next fiscal year; and using more than $200 million from a medical compensation fund to balance state budgets.

Most of the remaining third of the decline was from falling cash balances in the AFR general fund (dashed line in chart). 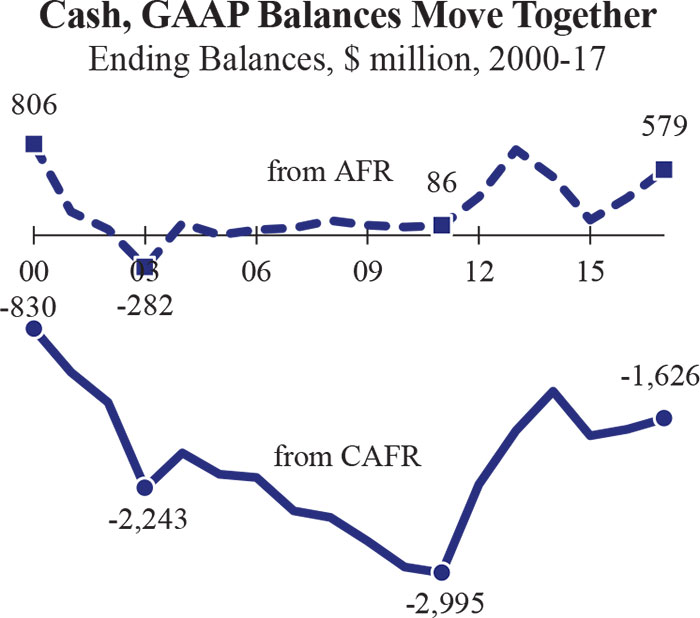 Wisconsin’s negative GAAP balance is akin to the amount owed on a credit card. It represents spending the state has committed to, but will pay for in the next fiscal year. Like one’s personal credit card, the balance is manageable if future revenue growth is sufficient to support it and new spending commitments are controlled.

Moody’s cited a growing economy, conservatively managed budgets, and adequate liquidity as reasons for a recent upgrade of Wisconsin’s debt. It also said improvements in the GAAP balance could trigger further upgrades, while deterioration could lead to a downgrade, which would lead to higher state borrowing costs.

The easiest way to improve the GAAP balance is to increase budgetary balances and add to the state’s rainy day fund. However, the 2017-19 state budget approved last summer uses about $250 million of these balances to pay for on- going spending. An improved revenue outlook reported in January could reduce that drawdown, but lawmakers appear poised to spend much of the additional revenue.

◾ A California study has concluded that a per-mile levy on drivers could successfully replace the state’s fuel tax. California and other states are considering “vehicle miles traveled” (VMT) fees as hybrid and electric vehicles increase and fuel sales decline.

The pilot program used several methods to track drivers’ mileage, including odometer readings, mileage permits, smartphone tracking, plug-in devices, and in-vehicle telematics, all of which worked “to some degree” in practice.